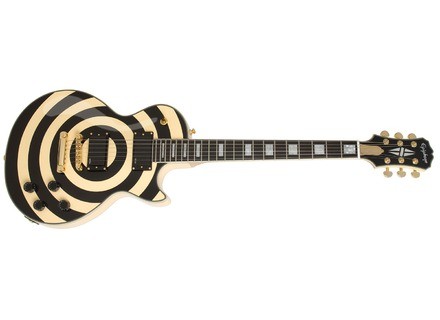 View other reviews for this product:
Epiphone is the official budget line of Gibson. Unlike Gibson guitars Epiphone guitars are made outside of America. Since they are official copies they have the exact same shape as the Gibson guitars do. This is the Epiphone version of the Zakk Wylde Les Paul custom. The main difference with this guitar is the electronics and some of the wood selection. The guitar still has a mahogany body and a maple neck but the fretboard is made of rosewood instead of ebony. The electronics are still EMG pickups but they are not active EMG's. They are EMG's budget line of passive pickups which are pretty poor but better than what this guitar would have come with. The guitar has Zakks Bullseye motif and after all these mods it is your typical Epiphone Les Paul. Each pickup has its own tone and volume control and there is a 3 way switch for your pickup selecting.

This guitar plays like any other Epiphone Les Paul. Other than the raw back of the neck this guitar is a pretty standard Epiphone. The raw neck helps make the neck a bit faster because with a finished neck you can get a sticky feel. If you are use to modern guitars with thin necks the Les Paul neck will be very big for you. Because of the set neck design there is a large neck tenon and joint. This can make the upper frets hard for some people to reach because the body essentially joins the neck at the 17th fret. After the 17th fret you are reaching around the body to get to the frets. The tuning stability is good because there is no tremolo. The quality of hardware Epiphone uses is not that great. I have had problems with the input jack unscrewing itself and things like that.

This guitar does not really sound like the Gibson Zakk Wylde Custom but it sounds better than a normal Epiphone Les Paul. The passive pickups are built to emulate the tone of the 81 and the 85 but it just doesnt quite get there. The bridge pickup is tight like an 81 but it doesnt quite have the same top end sizzle as a real 81. The neck pickup is closer to the active version than the bridge. The 85 naturally has a warmer more passive sound so the passive version does not differ much in the sound department. Since these pickups are EMG's they have the quick connect wiring system so you can easily swap these pickups out with a set of active EMG's when you get the chance and this guitar will really rip then.

The Gibson Les Paul Zakk Wylde Custom is pretty outrageously priced. This guitar is very reasonably priced with only a few differences. With a 200 dollar pickup swap you will have pretty much the same guitar as the Gibson for thousands less. If you are a Zakk Wylde fan and cant justify playing thousands of dollars for a Les Paul Custom this Epiphone is a good option.
Did you find this review helpful?yesno
Cookies help us improve performance, enhance user experience and deliver our services. By using our services, you agree to our use of cookies. Find out more.