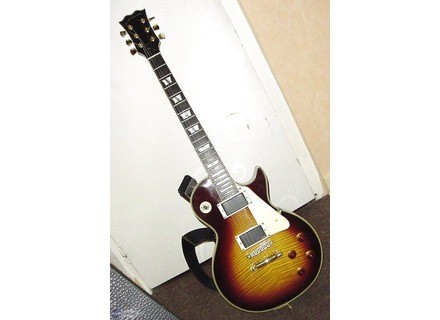 Asian guitar manufacturing is none other than the manufacturer Young Chang has specialized in the manufacture of pianos
in good Les Paul clone It has 2 humbuckers which are activated by a switch 3 positions typical of the original model home GIBSON
the handle is collbr / I say more, it smells of Les Paul around, the shape is (except the head which differs a bit) the sound is too big and fat while
being given that I was looking for a guitar of this type and that the finances were not at the top, I broke down and I do not regret in any case, c is one of the best purchases I have made in recent ann es

basically there is no logo "fenix" and the wave on the head a bit different, it would be a GIBSON

in short a very good product far superior to current epiphone and even to the oldest (and I know what I mean, I've had)
I note a 9 because the head is not exactly true (I Motes)

The handle is very pleasant and the interface is modeled on the Les Paul in all points (both good and less good)
weight is how to say .... .... Therefore
the sound is big enough in saturated but still very clear in the correct
c is versatile as the true

It should have 100% my style of music (from rock to thrash) and seems built to last
I use a Laney 100SC World Series and ca claque
the sound is big fat but knows how to stay precise and sharp, short but happiness
zztop of a passing metallica slayer and not others .... it goes without flinching

I use it for a few weeks, and already I can not do without (which saddens the 14 other guitars in my personal collection)
being given that I pay this wonder 150 (very good opportunity) is the ratio qualitprix for once unbeatable
as I said above I did the last few weeks and if he had something happen to him (ca me already chilling just to think) I was looking for from one of his sisters in the second
See the source
Did you find this review helpful?yesno
Cookies help us improve performance, enhance user experience and deliver our services. By using our services, you agree to our use of cookies. Find out more.