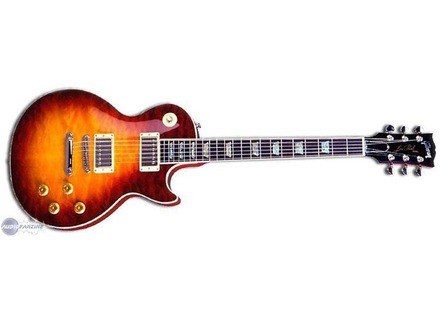 This is probably one of the nicest looking Les Pauls ever created. If it's not the best looking, it's certainly one of the most eye popping out there. It has a mahogany body with a figured maple top, a set mahogany neck with an ebony fretboard and trapezoid inlays, 22 frets, binding all around, tune-o-matic bridge, two humbuckers, two volumes, two tones and a three way switch.

Gibson did a very good job with this guitar. First of all, the flame top on this is gorgeous. It truly pops out at you, and it's almost 3D in some ways. The binding was done very nicely, and I didn't see any bleeding or odd stoppages. The inlay work was great, too. There were no fillers or anything like that. The nut was cut correctly on this, so there were no tuning issues. The frets were also pretty good. I was able to get some nice action on this without it fretting out elsewhere on the neck. About the only real issue would be the huge neck joint, but that's a standard Les Paul feature.

The guitar sounded pretty good for the low to mid gain stuff. It has the '57 Classic pickups in it, and they work nicely for that somewhat hot PAF kind of tone. For clean tones, with the tone knob rolled off and on the neck pickup, it got a very great blues tone. With the tone knob up, it had a decent spank going on. The bridge pickup has some nice bite to it without being overly thick, and that's a great thing for a Les Paul. However, these pickups seemed to lack output for the real high gain kind of stuff. It can do 80s metal, but beyond that, it kinda has too much of a vintage vibe.

If you can afford one of these, I highly recommend them. They're gorgeous looking, play great and sound awesome to boot. I have a feeling that most people who buy these aren't in the metal category, but if you are, you'll probably want to change the pickups for something hotter and tighter. That aside, the pickups should do well for just about anybody out there.
Did you find this review helpful?yesno
Cookies help us improve performance, enhance user experience and deliver our services. By using our services, you agree to our use of cookies. Find out more.