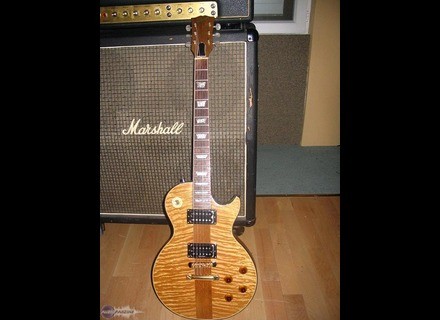 Gibson made a pretty "different" Les Paul when they made this. At first glance, it almost seems like it might be some bizarre neck-thru, but it's really just a figured top wood they added for whatever reason. The guitar features a mahogany body with a maple top and walnut stripe running down the middle, mahogany neck with a rosewood fretboard, 22 frets, trapezoid inlays, pickguard, binding, hard tail bridge, two humbuckers, two volumes, two tones and a three way switch.

The first thing you notice on this guitar is that the stripe really stands out. It took me by surprise when I first saw it, and I thought it was actually some bizarre neck-thru they decided to make. The inlay work on this was done nicely. There were no fillers or anything like that in there like I've found in some lower end Gibsons. The nut itself was cut properly, although the string gauge that was put on this guitar was wrong. Someone put 11s on it, and they were a touch too big for the nut on the bass side. The fretwork itself seemed to be great with no annoying edges slicing your hand or uncrowned frets.

The Spotlight can be a bit hard to find in the stores, but they're pretty cool guitars. The looks are definitely in the eye of the beholder, but I think it looks pretty neat. I don't think they're exactly worth the money that they fetch, however. If I were to buy one, I'd probably replace the pickups in it, but that's just me. I was never a huge Gibson pickup fan to begin with.
Did you find this review helpful?yesno
Cookies help us improve performance, enhance user experience and deliver our services. By using our services, you agree to our use of cookies. Find out more.