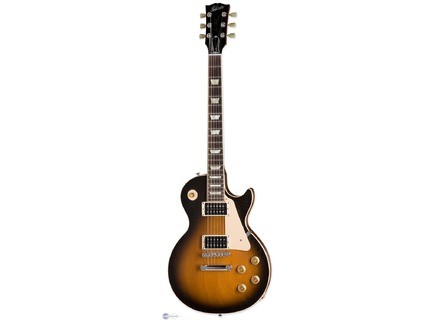 View other reviews for this product:
Usually, you have to look at the Les Paul Studio to find a guitar that's all mahogany with the same shape as the Les Paul. However, that lacks some of the nicer features that the higher end models have, and the quality control can be a bit iffy. This is for those who want an all mahogany guitar with binding. The guitar features a mahogany body with a mahogany top, mahogany neck with a rosewood fretboard, 22 frets, trapezoid inlays, pickguard, binding, hard tail bridge, two humbuckers, two volumes, two tones and a three way switch.

The guitar was put together fairly nicely. There were no issues with the nut. The best way to tell is to simply play it. If you keep noticing you're going out of tune and it "pings" when you tune, that means the nut is cut improperly. The fretwork was also pretty good on this. I was able to achieve relatively low action without any real issues. The binding work looked nice, and the gold hardware didn't have any tarnish on it.

The guitar sounded pretty strong in the low end, but I couldn't help think that it wasn't quite as "Les Paul" sounding. The bridge has some nice bite to it while remaining fairly thick sounding. You could easily do everything from blues to heavy metal with this thing. The neck pickup had a nice vowely tone, but I prefer hotter and smoother neck pickups. Keeping the tone knobs on full helped get the I wanted, but it still didn't have that "cut" that I like.

These are very thick sounding guitars. If you're a fan of that Studio tone, you'll love these guitars. If you're a fan of the Standard tone, you'll probably want to avoid one of these, unless you want something with a bit of a different tone. These tend to be more midrange heavy and focus more on the low end than that upper bite that Les Pauls are known to have.
Did you find this review helpful?yesno
Cookies help us improve performance, enhance user experience and deliver our services. By using our services, you agree to our use of cookies. Find out more.