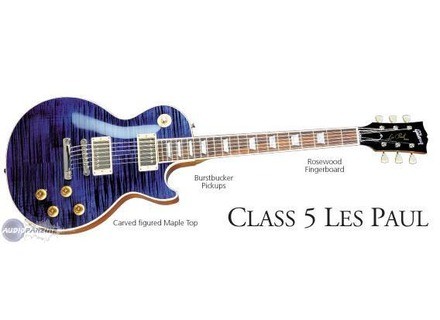 This is one of the few Gibsons that actually doesn't come with a pickguard. I have a feeling that it was due to the fact that the quilt top on this looks great, and they didn't want to hide any of it. The guitar features a mahogany body with a beautifully figured maple top, mahogany neck with a rosewood fretboard, 22 frets, trapezoid inlays, no pickguard, binding, hard tail bridge, two humbuckers, two volumes, two tones and a three way switch.

The quilt is the first thing you notice on this, and it really popped on this guitar. It was deep and had some almost 3D quality to it that other Gibsons didn't seem to have. That said, PRS tends to have better tops from what I've seen, so if you're going for some of the best tops, you might want to look elsewhere. The fretwork on this was pretty solid, and I didn't find any real issues with it other than the standard binding-over-frets issue I tend to have with every single bound fretboarded Gibson. The nut on this, however, wasn't cut correctly. It needed to be reshaped slightly as the slots were binding a bit. If you've ever tuned a guitar and noticed a slight ping, that's because the nut is binding. That's what was happening with this guitar.

The guitar had the newer Burstbucker pickups in it, and I wasn't the biggest fan of these pickups. They do the hard rock tone quite nicely, but I tend to prefer higher output Seymour Duncans or DiMarzios. The biggest issue I had was that the neck pickup on this wasn't able to get the tone I was looking for. I tend to like really warm and fat neck tones, and this one was a bit bright for my tastes. If I were to keep this guitar, I'd probably swap in a JB/59 combo. That combo seems to work the best with Les Pauls, in my opinion. The JB is versatile enough to do any genre, and the 59 just excels at cleans and lead tones.

The quilt on this is great, but you're going to pay for it. Gibson charges well over the premium for these guitars, and I can understand why so many people are turned off by them lately. It's almost like highway robbery at times with these things. The pickups weren't my thing, and the small issues with the guitar meant that I wasn't going to hang onto this guitar for too long, but I'm sure there are people out there that'll find this guitar to be the best they've ever played. It's just the luck of the draw. Don't buy on eBay due to scammers.
Did you find this review helpful?yesno