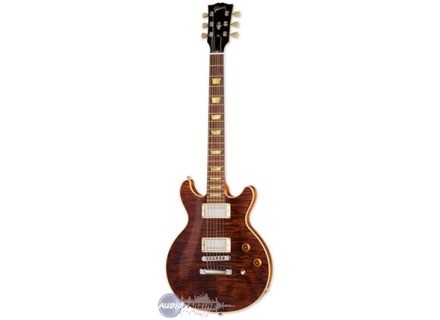 View other reviews for this product:
The Doublecut is Gibsons attempt to get the playability of an SG on a Les Paul. It was never a popular model but it is a good solid guitar and does what they set out to do. The guitar has a mahogany body with a maple top and a set in mahogany neck. The neck has the slim 60s profile like an early SG. The neck has a 22 fret rosewood fretboard. The guitar comes with a set of Burstbucker pickups. The example I tried out had some Seymour Duncan pickups swapped in their place. The controls are simple with a volume and tone with a 3 way switch.

This guitar really does mix the playability of a SG with the tone of a Les Paul. It is more Les Paul than SG which Les Paul players should like. The upper fret access is close to that of an SG but not as good since the horns are bigger like on a Les Paul. The guitar is heavier than an SG due to the big body with the maple top Les Paul style. The neck is really nice to play since it is the thin 60s profile which they put on a lot of SG's. The fretwork on this example was pretty good. Im not sure if it was Plek'd or not but it was pretty decent.

The Burstbucker pickups that this guitar comes with originally had been removed in this one and they had been swapped with some Seymour Duncan pickups. This example had a Custom Custom swapped into the bridge and a 59 in the neck. The Custom Custom is kind of like Seymour Duncans Tone Zone. This gives the guitar a very versatile tone. It has a great tone for hard rock. It is not super loose but it has great output so you can get a great classic rock tone for your riffs. The 59 in the neck is a classic selection. The 59 has a super smooth sound that is very PAF like. Because the pickup is so smooth it can get a bit muddy at times. If you are playing with a ton of gain you may want to consider a Jazz in the neck position. The Jazz is very similar to the 59 but it has a bit more high end bite that keeps it from getting muddy.

These guitars were never super popular but they are good solid guitars that solve a lot of the problems Les Paul players have and dislike. It seems that whenever Gibson has a problem they either ignore it and everyone keeps complaining or they fix it and no one bothers to accept the fix. If you want a Les Paul that plays like an SG but still sounds like a Les Paul this guitar is for you.
Did you find this review helpful?yesno