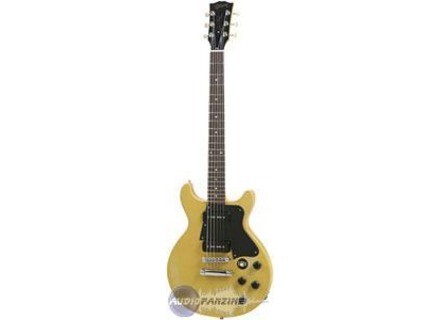 2 soapbar pickups (as large soap) black P90. These pickups have the legends of Gibson since 1954!
3 position selector: mic severe acute mic and 2 at the same time.
Note that the slecteur is under the bridge, which can give great shots without touching mdiators unlike les paul studio standard.
1 Volume 1 Tone for each pickup

The handle is large and fine. I love this kind of race that makes me think that of the aria pro 2 of my beginners.
Access in acute recess is facilitated by the two-sided strokes.

This is a guitar made from a block of mahogany fine enough: there is no table Saddle wave => weight much more lightweight than a standard les paul studio or classic.

It hangs on the strap as Sg: on the back of the bte.
Personally I do not like because the guitar tends naturally lean forward and it is not practical when you're like me used to bring the guitar down. A little bit of respect and it also rgl.

The form is simple I'm in love.

I play rock, pop, blues and punk. For these styles sound is amazing.
I want to say this out of the ordinary.
I had heard good dj on P90. The least we can say was that I'm not.
The P90 is a single coil pickup, but absolutely no mention on my grsillement MODEL.
Billy Bragg, Bob marley, the clash of the first album: all the sounds of guitars due to the P90.

To my taste is the ultimate micro.
A typical micro rpond that Manir a spectacular guitarist in the game. More guitar playing is over the microphone contrast expresses its effectiveness and affirm his personality.

In micro acute nasal sound was the typical first clash album. Treble cut with a knife and aggressive bass.
By coupling position of microphones was a more versatile: Fender is approached in much warmer, smooth and rock typ. I love this position, ideal for the velvet soft rhythmic riffs or intimate.

In his grave was a serious and hot.

I have long hsit between les paul junior (only 1 in P90 acute) and l and I really regret the two positions are sublime and serious compltent wonder the acute nasal microphone.

CHARACTERISTICS of the great micro cot is what percussive shots mdiators given to him.
There is a fishing mdiator the attack is really explosive and musical. It is: shall mean a small explosion every stroke of mdiator.
M'tonne that Bob Marley used to mark a setback.
In consquence is a sound which is tufted rgale the strings to bring out the rhythm.

I use it for one month and since queqlues days on my fender deluxe reverb. The couple is truly monstrous, clear sound of the distortion was a lgre its super versatile, proactive and friendly

What I like most? Her personality: The nasal sound typical of the acute, the cot of all percussive position, shape, gross and gruff guitar cot.
There is a fun game that there is not a studio is much more lgre and much more versatile.

BUT once again Gibson did in the bacl level finish: Mcanique middle nut strangely bad (the bass string is too large to enter, I will correct a luthier in a).
Points of pearl on the fretboard have been done with blocks: it is ugly!
The Gibson logo on the head of the handle is poorly done and comes carrment evil one feels the touch of pop!
Not have to look why it is less than the others ... CHRE
As it is fine with 2-sided strokes is more fragile than a guitar studio standard. The handle moves over and it should not be too much violence.
The tui flexible (and therefore non-rigid) comes with does not do it justice also

But this gives a crude cot cot simple rock'n'roll and I foutiste I love.
I got 650 in okaz gnral but we find it a little more CHRE (around 800)
Gibson has revealed a close MODEL trs with the series faded les paul (1000): a try!
See the source
Did you find this review helpful?yesno