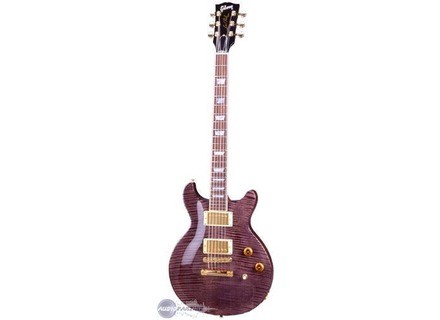 View other reviews for this product:
Voi few information about this wonderful and unique that is the Gibson Double Cut +
MODEL manufactured in the United States, Premire release in 1998. The MODEL I t has direct import of the United States and manufactures t this year.

Everything's in a standard Gibson is in the l. Just for those who do not know gibson consulting advice on Gibson Lespaul Standard. Few changes technically (if not two knob less for volume and tone, which is personally suits me), except in the choice of matrial, cutting and of acastillages.

The handle is longer 24 frets easily accessible, more lgre (less thick than other gibson) and conformatble sitting (all our ratings remain their place for once).
The highs are super accessible can make us cry without even crying! It's cool to have a gibson without that twisting the wrist and destroy the back, it's a first!

At the touch, I just try again, but I must say that it responds great, the handle is somewhat aggressive under the fingers (can be brand new) that's the impression I had also qd I had my new studio. In any case if you just go to the Fender and Gibson neck, you will shock it sr.
The neck is typical Gibson, thick and large, it is AIM but I must say that it is not comfortable in this premium ki config.

Finishing and acastillages are fairly treated (even happy for a guitar this price, is to see over time if it will hold better than my studio).

Bcp visibly working on ergonomics from gibson MODEL manufactured for the first time in 1998. They corrected their mistakes qq hsit erased to lose none of their style. I must say that it Russi.

Strangely the sound has nothing to do with my studio, here are more Submitted medium, ca Confre him a strong style blues or jazz.
It would great note, the sound is clear and clean.
It keeps all of the same sound as heavy and edged distortion, but the sound is beautiful Kler despite my old marshall valvestate8080! The sound is typical Gibson prserv in saturation with a trs treated in the clean channel.

As everyone says, there's no one that sounds like gibson.

I did that and the Les Paul Studio, so over a standard I would not be too similar. But I think the Gibson Standard has more pronounced than acute l. My studio was already much in acute (less than a std LP) but the Les Paul Standard DC + the plays in your medium. It can dplaire as some may delight others.

I have since qq days now, I do not let go!
Is that I liked the most before buying c'tait his cot "original", it cuts too. Sound when he ca me print clarity and punch in saturation. I Needed printing all this mix of sounds for a Gibson LP, however, instead of the typical prdilection a rock, or hard metal.

I am more than surprised about this wonderful guitar. The beauty and quality of Gibson surprised me at first, but once more enchant j'tais branch. Really no regrets!

New it costs around 2400 Euros, which is today the average price of a Gibson Standard. If you want all the advantages of Gibson, without inconvnients is this one that must be taken, even if it is a little less "mythical" as Lespaul Standard classics.


Music @ parliaments,
VydoLL
See the source
Did you find this review helpful?yesno
Cookies help us improve performance, enhance user experience and deliver our services. By using our services, you agree to our use of cookies. Find out more.