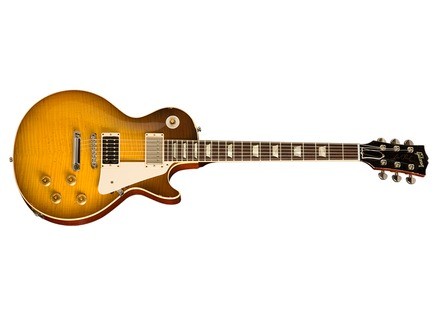 Jimmy Page is quite well known for his main guitar, but he also has another one that doesn't seem to get as much attention for whatever reason. The number two is similar to his number one, but it has some special switches hidden underneath the pickguard for extra tonal options. The guitar features a mahogany body with a maple top, mahogany neck with a rosewood fretboard, 22 frets, trapezoid inlays, pickguard, binding, hard tail bridge, two humbuckers, two volumes, two tones and a three way switch.

These models are put together very well. The first thing you notice is that the finish itself was pretty much flawless. I couldn't find any drips or any issues where the binding meets the paint. The nut itself was cut perfectly, so there were no tuning problems to worry about. The frets on this were nicely leveled, and I was able to get some nice action going. The ends were also not sharp, so it didn't hurt your hand every time you went up and down the neck. The toggle switches are pretty positive, although I find they're a bit of a pain to get at. Getting at the higher frets is the same as any other Les Paul in that it's not that great.

The guitar is super versatile thanks to the wiring and switches that are equipped on this guitar. If I want to get that bright, single coil kinda tone, it's just a push away. It really opens a lot of different tonal possibilities, and I kinda wish that Gibson would include these options on every guitar. The guitar sounds pretty good, but they're stock Gibson pickups. I'm not totally crazy about these. The sound average, in my opinion. The bridge is medium output, and it sounds fat. However, it doesn't overdrive the amp like I like my pickups to. The neck is a bit too bright for my tastes, but you can calm it down with the tone pot.

The price is a bit out there, but it's one of the most versatile Les Pauls out there. I really like the looks of this, and it played great. If you're going to buy one, buy used as you'll save a good bit of money. Try searching forums or something as that'll be the best place to find one at a good price.
Did you find this review helpful?yesno
Cookies help us improve performance, enhance user experience and deliver our services. By using our services, you agree to our use of cookies. Find out more.