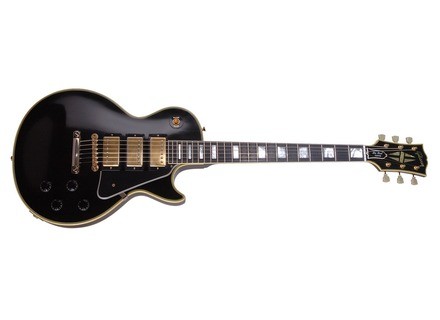 View other reviews for this product:
Back in 1957, Gibson made one of their most iconic guitars that is now known as the Black Beauty. This guitar was known for its fat tone, versatility and stunning looks. It had a class about it that no other guitar at the time really had, and the attention to detail was bar none. This is the reissue version. The guitar features a mahogany body with a maple top, mahogany neck with an ebony fretboard, 22 frets, trapezoid inlays, pickguard, binding, hard tail bridge, three humbuckers, trhee volumes, one tone and a three way switch.

The first thing I should mention is that I absolutely hate the middle pickup on this. If I'm going to have a middle pickup, it has to be a single coil. I hit the humuckers too much when I pick, and I find they don't sound any good in the first place, so I never really understood the point. The ebony on this was jet black, and it really stood out as being one great piece of ebony. It was all natural black and not dyed like some of the lower end Japanese guitars you tend to see. The neck on this is really big, so if you like thin necks, I'd look elsewhere. Binding was done nicely. Fretwork was good, but the nut could have used a bit more work. I noticed that it was binding in certain slots, and graphite would only be a temporary fix.

The pickups in this are like classic PAF pickups...mainly because that's what the original one had. The bridge is good for blues and rock, but it kind of struggles for metal. It can do metal, but I just think there are other pickups out there that do a better job. I really like how it responds to the volume knob. I can go from a nice, clean tone to a hard rock tone with just the turn of a knob. It's pretty cool, but you need to have an amp that'll allow you to do that. The JVM worked surprisingly well for that. The middle pickup sucks, period. Just not a fan. The neck is cool, but I tend to prefer to use it for cleans or some leads once I roll off the tone knob a bit.

If you're going to be buying this guitar, I have a feeling you have some deep pocket books. However, be absolutely sure you like the middle pickup in this. If you're on the fence about this, either go play one in the stores or just buy the two humbucker pickup one. If you notice you keep hitting the middle pickup, you probably won't want to play this, and it would be a big loss of money.
Did you find this review helpful?yesno
Cookies help us improve performance, enhance user experience and deliver our services. By using our services, you agree to our use of cookies. Find out more.