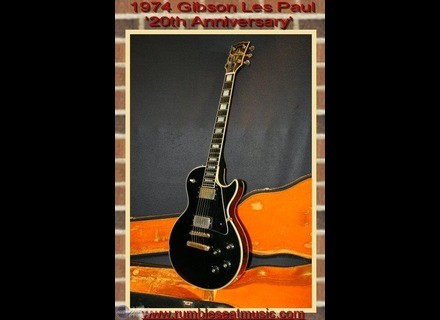 For their 20th anniversary, Gibson decided to release their own little Custom anniversary model. It was pretty much the same as any other Custom, but it had a few small changes here and there. if you're familiar with the Custom already, you'll probably know the specs of this. The guitar features a mahogany body with a maple top, mahogany neck with an ebony fretboard, 22 frets, trapezoid inlays, pickguard, binding, hard tail bridge, two humbuckers, two volumes, two tones and a three way switch.

The fretwork on this was starting to show its age, and it needed a refret. I'm not a huge fan of the medium frets they put on this from the factory, and combine that with the 12'' radius + the fact that they're worn, and you have issues with me being able to get the action that I truly wanted. However, I was still able to get some relatively low action without too many issues. It was just the fretting out aspect that was a pain. The guitar was put together fairly nicely. There were no issues with the nut. The best way to tell is to simply play it. If you keep noticing you're going out of tune and it "pings" when you tune, that means the nut is cut improperly. The binding work looked nice, and the gold hardware didn't have any tarnish on it.

The guitar sounded pretty good. The pickups aren't really my thing, to be honest. The pickups are standard Gibson pickups, but they seem to work for most. The bridge pickup has some nice bite to it, and it has some decent output. I find they lack the character for heavy metal, but they can work for 80s metal. The neck is a bit too bright for me. I like a thick, fat sounding neck tone, and these generally have a bit too much bite for me. However, they're clean sounding, and that works awesome for clean tones. The real annoying thing about this guitar was that the pots and control switch were starting to go out. I had to keep jigging them to get them to stay in contact, and none of my electrical sprays fixed it.

The guitars are good, but they can be vary expensive. Be sure not to pay too much for these as they're really not that much different from any other Gibson out there. You can find some great deals online, but be wary of eBay deals as lots of people are selling fakes out there. Only buy from someone who you trust and can confirm the guitar itself is a real Gibson.
Did you find this review helpful?yesno
Cookies help us improve performance, enhance user experience and deliver our services. By using our services, you agree to our use of cookies. Find out more.