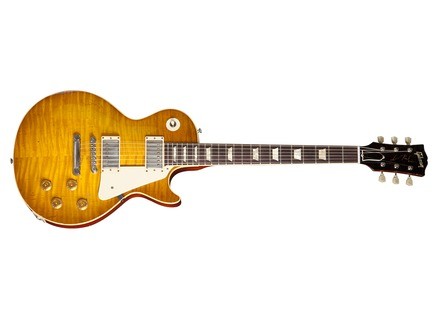 Tom Murphy is one of the kings when it comes to aging, and this guitar is no different in terms of how great it looks. The guitar features a mahogany body with a maple top, mahogany neck with a rosewood fretboard, 22 frets, trapezoid inlays, pickguard, binding, hard tail bridge, two humbuckers, two volumes, two tones and a three way switch.

The main to look at here is the nicely aged finish, and Tom Murphy does an awesome job. The checking is very authentic, and it seems to really look like it was played without being overly "worn" if that makes any sense. The guitar was put together fairly nicely. There were no issues with the nut. The best way to tell is to simply play it. If you keep noticing you're going out of tune and it "pings" when you tune, that means the nut is cut improperly. The fretwork was also pretty good on this. I was able to achieve relatively low action without any real issues. The binding work looked nice, and the gold hardware didn't have any tarnish on it.

A lot of people don't dig the whole wear thing, and I can see where they're coming from. I'm also one of those guys who would rather spend less money and "relic" it myself, but these guitars really do look stunning. Getting authentic relicing can actually be pretty hard, but Tom seems to have mastered this technique nicely.
Did you find this review helpful?yesno
Cookies help us improve performance, enhance user experience and deliver our services. By using our services, you agree to our use of cookies. Find out more.