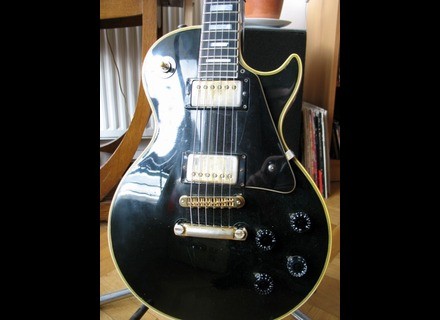 This is part of the real old school Gibson era where things were a bit...heavier. A lot of this has to do with the fact that I'm so used to playing Gibson Les Pauls that are somewhat weight relieved. On top of that, this was one of those pancake bodies, so it had a ton of extra weight. The guitar features a mahogany body with a maple top, mahogany neck with an ebony fretboard, 22 frets, trapezoid inlays, pickguard, binding, hard tail bridge, two humbuckers, two volumes, two tones and a three way switch.

Th guitar had its fair share of battle scars due to its age. One thing worth noting is that this guitar had a refret sometime in its life, so the binding nibs were gone, and the frets were a bit bigger than what originally came with these. The neck profiles vary depending on what year you buy, and the one I played had a fairly thick neck. Some people will dislike this, but it was never a huge deal to me. I seem to be able to adapt from super thin necks like the Wizards to extremely thick Nocaster necks without much of a problem. The flatter radius on this was wonderful, and it allowed me to lower the action lower than a normal Strat would allow. The tuners on this model aren't as bad as the older Standard model, but I'd still replace them with locking tuners.

The previous owner had thrown out the stock pickups and replaced the pots back in the day. This guitar was killer, but it had aftermarket pickups installed in it. The guitar had a JB and a Jazz installed. The JB in the bridge is awesome for everything from blues to metal. It can really do every genre, it's that versatile. The mahogany body helps keep the JB sounding fat, and the bass on it is perfect enough to where it's not super tight to where it sounds sterile but it's also not super loose to where it sounds flabby. The Jazz in the neck is like a cleaner, more polite 59. It has a bit more treble and sounds a bit more linear, but it delivers some awesome clean and lead tones. I find that it's a bit clearer sounding than the 59. The pots needed to be cleaned, and the switch was starting to go out, but those are easy fixes.

If you're looking for a solid old school Les Paul Custom, this is something to look into, but I prefer the mid 70s Les Pauls with the maple necks the most. They seem to be the most aggressive sounding and work great for metal -- my main genre. I am also a big fan of refretting these and getting some new pickups installed in them to help really bring them to life, but others may disagree.
Did you find this review helpful?yesno
Cookies help us improve performance, enhance user experience and deliver our services. By using our services, you agree to our use of cookies. Find out more.