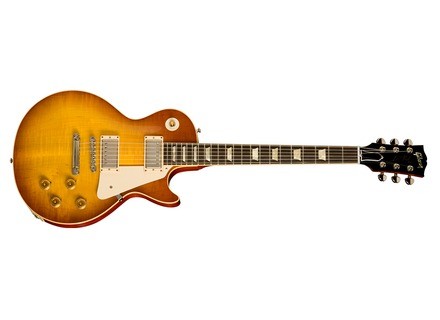 Most people know Eric Clapton as a Fender Stratocaster player, but he used to be a really big Les Paul user back during the Cream days. It was during this time that I thought he had the best playing, too. The guitar features a mahogany body with a maple top, mahogany neck with a rosewood fretboard, 22 frets, trapezoid inlays, pickguard, binding, hard tail bridge, two humbuckers, two volumes, two tones and a three way switch.

This guitar is put together very nicely. The frets are leveled properly, and the ends don't cut your hand every time you move it up and down the neck. The nut was also properly cut, so there were no tuning issues that I experienced. An improperly cut nut can be a real pain, especially once you start using alternate tunings. Getting up to the higher frets still sucks, just like 99% of Les Pauls, but what do you expect. This guitar is really no different from any other Les Paul out there. In fact, this guitar reminds me a lot of the Les Paul Classic thanks to the more plain maple top and the thinner neck that it has on it.

The guitar has some lower output pickups in it, which makes sense considering that Clapton is primarily a blues player. While he used to do rock, that's not really his thing anymore. These pickups are low output, and they are pretty cool for that blues tone. If you roll back the tone a bit and go to the neck pickup, you can get a pretty sick jazz tone, although you'll lack that "airyness" that you get from the E-335. The guitar actually sounds pretty cool once you throw some gain on it, and I was rocking out Cream like it was no tomorrow. However, don't expect these pickups to be metal monsters.

The guitar is extremely solid, and it sounds great. If you keep in mind who this guitar was made for, I'm sure you'll be very happy with it. Just don't expect to start playing heavy metal on this without some caveats. If you want one, I recommend buying it used as you'll get a much better deal on it than if it were new. Try searching eBay, but watch out for fakes.
Did you find this review helpful?yesno
Cookies help us improve performance, enhance user experience and deliver our services. By using our services, you agree to our use of cookies. Find out more.