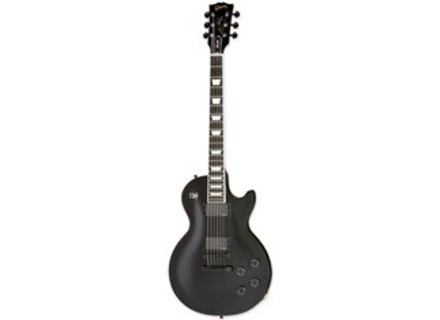 View other reviews for this product:
If you want to get into the Gibson Les Paul world then this is the most basic intro price you can do it with. This is the most basic intro price that you can afford to buy a Gibson Les Paul. This guitar is like the fade cherry and brown guitars but just in a satin black paint job. This is not going to be like a normal paint job but almost like an ebony stained guitar. You can see the the wood grain through the black paint stain which is very cool on its own. This is the starter set to your Les Paul dream come true.

This guitar is a nicely priced guitar. The Gibson Les Paul's can go upwards of $7000+ for some of their custom pieces. And pretty much all sound basically the same. If you heard a recoding of a $7000 Gibson Les Paul and $799 Les Paul then you would have a hard time finding out which one is which. What is comes down to is how much wood and acre went into the exotic guitar compared to this one. Many of the more expensive ones have brilliant quilted tops or they are vintage standard replicas from the 50's This guitar I would argue will sound very similar to one of those guitars. I would however switch out the pickups as I have never liked the Gibson pickups. They just don't have the sizzle that I like a pickup to sound. Other than that this is a great guitar for the price.

These guitars come in new at around $799. That is the most basic intro price you could get out of a Gibson Les Paul. These are good sounding guitars and for the money this is good deal. I would try to buy one used that wasn't chambered if I had the option.
Did you find this review helpful?yesno
Cookies help us improve performance, enhance user experience and deliver our services. By using our services, you agree to our use of cookies. Find out more.