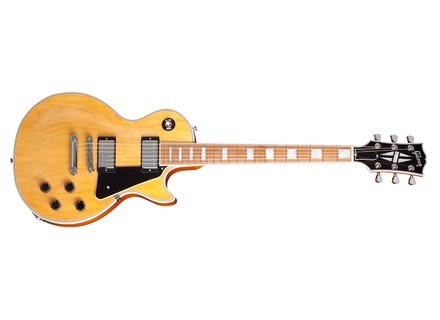 View other reviews for this product:
To me this is one of the stranger Gibson models to come out in this period in 2011. With Gibson having problems around their rosewood fretboards they are putting out guitars with baked maple fretboards. They put the maple in an oven and it makes it harder and smoother and also darker. It looks like really pale rosewood but feels like ebony. This guitar is pretty much a Les Paul Custom but with the baked maple fretboard. I find this interesting because Les Paul Customs dont come with rosewood fretboards which they are replacing with baked maple they come with ebony fretboards. This may be the reason why this guitar only cost 1800 USD currently while a Les Paul Custom with an ebony fretboard costs over 4000. I guess they are trying to tell me a fretboard costs 2200 dollars. Either way this is not 2200 dollars less of a guitar just because the fretboard is different. This is a decent guitar and for all intents and purposes its a Les paul Custom. The guitar has a mahogany body with a maple top. The finish on this model is black so it looks like all the classic black beauty Les Paul Customs. The neck is mahogany with the aformentioned baked maple fretboard. The fretboard has block inlays like a Custom should. It has the big custom headstock with the split diamond inlay. Everything is bound and the body is double bound. The pickups are a set of 57 classics and the controls are typical Les Paul.

The playability on this guitar is fine. The baked maple feels like ebony since it is so hard and dense. I hear it is also more stable under temperature changes. This model has the 60s neck profile so it is nice and easy to play. The body is not chambered so it feels like a real Les Paul and sounds like one. These Les Paul Customs look super classy with the binding everywhere. I think that is one of the main reasons so many people go for them.

Im sure there are people that think the maple fretboard is going to totally ruin the sound of the guitar but I dont think it makes that much of a difference. Side by side you cant really tell by listening. The pickups make more of an impact. This guitar comes with decent Gibson pickups so that is good. This guitar has 57 classics from and rear. There are some full priced Les Paul Customs that come with Burstbuckers, why I do not know. 57 Classics are some of Gibsons better stock pickups. They have a very PAF like tone of them. They have the vowel quality and good sag. If you are looking for vintage Les Paul tone these pickups are going in the right direction. Some of Gibsons other pickups are a bit to hot or compressed to get you the real oldschool Gibson tones even though they are in Gibson guitars.

If you are looking to buy a Les Paul Custom you should check out this guitar first. Its 2000 bucks less but its not 2000 dollars less of a guitar. You can save yourself some money. If you are dead set on Les Paul Custom looks you can dye the fretboard. No one would be able to tell you arent playing a full Les Paul Custom. Real customs are way overpriced at nearly 5000 dollars. You can get all but the most exotic PRS guitars for a lot less than that. You can also get this guitar for less than half of that and it has just about everything you would get on a Les Paul Custom.
Did you find this review helpful?yesno
Cookies help us improve performance, enhance user experience and deliver our services. By using our services, you agree to our use of cookies. Find out more.