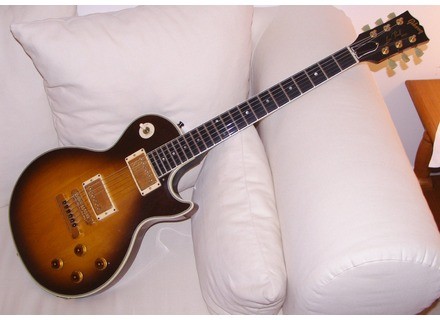 View other reviews for this product:
The Gibson Les Paul Studio is basically a hunkered down version of the standard Les Paul as it lacks some of its more "ornate" features. However, all of the elements that produce the world renowned Les Paul tone still remain, and it is intended for the studio musician. This guitar has two double humbucking pickups, a three way selector switch two select between the neck and bridge pickups or combine both. There is also a volume knob and a tone knob for each pickup.

This is an excellent sounding guitar, but it is heavy if you're not used to it. I am also cursed with smaller hands for someone of my size and height, making the instrument difficult to play. The action is low, and I can understand how this guitar is such a legend, but it was difficult for me to play in the short time that I owned one.

This guitar sounds amazing regardless of what style of music is being played, or in spite of what crappy amplifier you put it through. The tone cuts right through due to a combination of the high quality craftsmanship and excellent pickups. It's just a shame that I wasn't able to play it better than I could.

This guitar is too heavy and too difficult for a person with small hands to play. When I think of Les Pauls, I considered their tone to be the epitome for a variety of types of rock 'n' roll music. It'll do soft, it'll do crunch, it'll do scorching leads all very well. I only wish it were easier for me to play, otherwise I'd probably have a few different Les Pauls by now. If you find that you have the same difficult as me, I recommend trying an SG (Epiphone 400) as that is much easier for me to play, in spite of the fact that it's not as well balanced and likes to take nose dives.
Did you find this review helpful?yesno
Cookies help us improve performance, enhance user experience and deliver our services. By using our services, you agree to our use of cookies. Find out more.