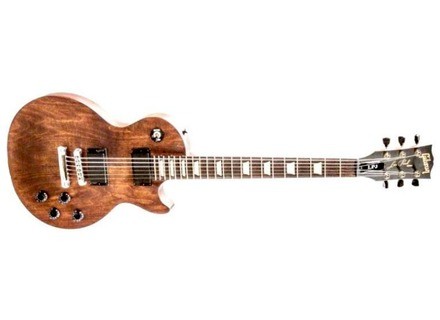 LPJ, LP-Shaped Guitar from Gibson in the Les Paul series.

« Gibson’s sound and legend are not so expensive. However... »
4

Value For Money : Correct Audience: Anyone
View other reviews for this product:
Hi all!

Let me share my opinion on this Gibson which i’ve now been a lucky owner for a little over a month.
The overall presentation of the guitar can be found almost anywhere else, so I’ll concentrate on what its pros and cons are, at least according to me.

So let’s start with the good news:
- I really love the satin goldtop finish, so the color is really beautiful, nothing to find fault with in that regard, and the natural wood color, satin-finished back andneck are also beautiful (please note that the headstock is also in a satin finish).
- The black pickup covers, machine heads and toggle switch really get along well with the goldtop finish.
- The 490R and 498T pickups are Gibson’s legendary set, which is also to be found on the Custom model. The sound is here, nothing to say about it! I’ve used in in the studio (DI) and with amps (Fender Blues deluxe reissue and Marshall JCM double stack), it sounds incredible! No doubt abouth the sound, this can only be a Gibson! =)
- The machine heads keep in tune, no problem.
So here are the good points, and soundwise I’m very, very happy with this guitar!

Now, let’s get to the not-so-positive points:
- the finish is only so-so… I’ve seen worse, but the lack of a binding mcaused the goldtop finish to spill slightly at the cutaway. No catastrophe here, but not a good publicity for the brand either…
- the 3-position switch often causes a small “poc” noise in the amp when you use it to switch the pickup position… If need be, you can have it repaired or even changed.
- Gibson’s “protection” softcase is rather shitty, not well-thought and really unpractical. I’ve owned Tobago softcases which were way better than that.

But that’s still a way for Gibson to spare money, considering a Gibson flycase costs in the 150€ range. It is also to be considered that the – less expensive – Gibson Les Paul Junior comes with a hardshell softcase, so, what’s going on!?? Well…
- and finally, the one most problematic point: THE SHITTY QUALITY OF THAT GIBSON LACQUER!!! Yeah, sure it looks good… but I’ve only owned it for a little over a month and the lacquer is already starting to chip on the top, right under the pickups O.O (just where my right hand’s last two fingers rests on the guitar when I play). First this had caused the finish to shine, but now the lacquer has gone away and I can almost see the top’s maple wood!!! And I’ve been a guitarist for over 20 years and own several guitars, which means I’m in no way playing exclusively this one. If that were the case, I guess that would have happened in a mere fortnight...

Oh, yeah, also I forgot to mention that this model comes without a pickguard which would have prevented the lacquer from chipping away there

(well, OK, when there’s one I always take it away, I hate playing with it ^^). This is really penny-pinching! Just as the lacquer’s thickness and quality… I know what you’ll say, it’s a thin and soft lacquer which allows the wood to breathe and so on, but I’ve owned another Gibson (a 2004 Les Paul Classic with honeyburst finish with a normal gloss finish which cost me 2000 euros) for over 10 years and it still looks brand new, which didn’t prevent the sound from getting better with time! And it’s seen many a rehearsal, show in violent and muggy situations, tours in a hot car, truck, train and so on… And it’s still like new…! So, what’s the reason!!!???
I can even add thay I also own a 1994 cherryburst Epiphone Les Paul Standard with a “normal” gloss lacquer, which is also like new!!! And it’s seen even more than my 2004 Gibson Les Paul classic..! That’s just crazy!!

I bet that within a few months, my goldtop will be looking like an overused vintage guitar from the 60s…

So no problem as to its sound, this guitar is great..! vI’m currently recording an LP with it and it sounds awesome! (almost better than with my 2000 euro 2004 Les Paul Classic!!

). But as to its finish, the manufacturer’s penny-pinching policy (such as the pickguard) is really what I’ll call f***ing up… for a guitar which costs almost 800 euros, it hurts!

So, I’m satisfied with it, but I had to say my discontent as to this Gibson lacquer problem (sure it DOES let the wood breathe, as there’s almost no lacquer at all…)

An advice if you’re after one (granted, it was a 2013 limited edition which is now almost impossible to find but who knows ^^):
- put a Les Paul pickguard on it, or have it installed by a repairman as it takes drilling two holes for the screws in the guitar’s body. This way you’ll avoid what I’m going through…
- Take great care of it using a Gibson polish and other cleaning products from them
- Buy a solid flycase to protect it when travelling or storing it (or you can make one yourself like I did, buying parts from Conex)

It’s a great guitar with a beautiful finish, but which is too fragile…
I don’t regret buying it, but I have to find a way to stop this lacquer from wearing out (and hide the result from it) under the pickups (having the guitar relacquered would cost at least two-third of the guitar’s price

)
Did you find this review helpful?yesno
Cookies help us improve performance, enhance user experience and deliver our services. By using our services, you agree to our use of cookies. Find out more.