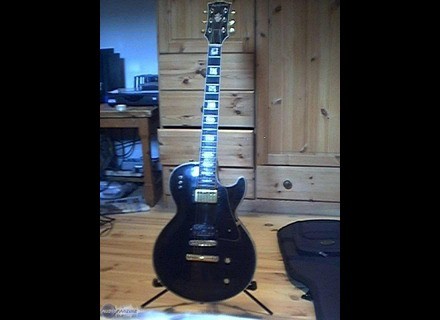 View other reviews for this product:
In which country was it made? (United States, Japan, Mexico, France ...)
In France, by brothers Jacobacci.

How many frets, what kind of micro as well as their configuration?
What are the settings (volume, tone, micro switch ...)?

If I remember correctly handle allowing access to C sharp.
It was equipped with two microphones Benedetti. Its electronics (passive) was classic: volume and tone plus a phase switch for direct, in other words, to bypass the resistance of the volume and tone giving her a slightly more powerful and a little better defined.

I played with a lot of amps. What seemed crucial was the choice of micro, very typical in the case of Benedetti, so little versatile.

I played this guitar for twenty years. I bought used in 1976, she had four or five years.
I liked its weight, compared to the Gibson must require twenty physiotherapy sessions per year if we want to continue to keep right.
After a few years, I remove Benedetti I found too crystalline and lacking in warmth, and replaced by di Marzio.
Then, probably because I had played too, I had the feeling of having been around and I have for sale. Nobody has acquired ... but one day I was contacted by a museum. So it is there, warm and free from dust, I suppose, which is better than in the shadow of a cover, but less well in the hands of a guitarist.
See the source
Did you find this review helpful?yesno
Cookies help us improve performance, enhance user experience and deliver our services. By using our services, you agree to our use of cookies. Find out more.