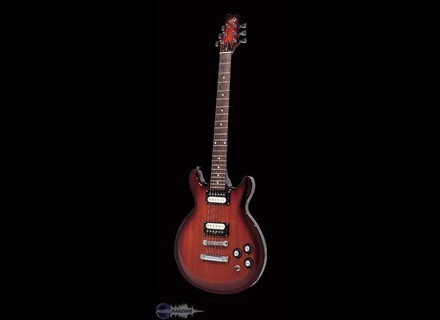 View other reviews for this product:
Ben good and I think pretty roxane (finally rx-200 but much less nice

) Has made in Asia.
Y has 22 frets with nice points (y'en even two on the 12th lol). Dual microphones splitables by push / pull.
Y has a fixed bridge type les paul
Worse as two volumes (with push / pull) and a tone.
Cole handle but not see the colure ... least one is not that enough ...

The handle is downright enjoyable, even bringing my guitar so low, well, I get ACCESS to almost treble without problems!
Well, it has a joile form but has the handle that goes down when you loose (only while standing of course), I'm used to I was playing on a G-400 before, so ...
Is obtained easily thanks to its good splits. The possibilities are fMeasure!

Ben I play hard-rock, rock, a little while chti mtal ... And has ben sounds my friends!
I play with a Vox AD15VT amp and it's terrible!
Ben Tone with a 0, it was warm and round sound. It grows a little tone: From slamming sounds as if it rained!.

I have been using ... One day! I let her go!
I love the splits but the fact that it is not very well quillibre bother me a bit.
I ssay lag roxane a classic and I have not found the diffrence enough to take the blatant roxane.
I pay 440 euros and I think it's an exellent qualitprix report.
Exprience with, well I would do without this choice problem.
See the source
Did you find this review helpful?yesno
Cookies help us improve performance, enhance user experience and deliver our services. By using our services, you agree to our use of cookies. Find out more.