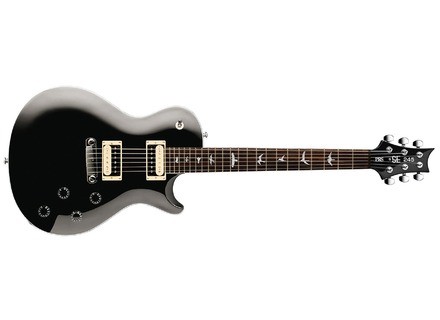 SE 245, LP-Shaped Guitar from PRS in the SE series.

Buy this productView price information >
View other reviews for this product:
The PRS SE line of guitars is their line of guitars that is made overseas. They are much cheaper and usually have very simple finishes. This guitar breaks this image by being low cost but having an awesome top and finish to go along with it. This is the PRS SE 245 model. This SE model is targeted at more traditional single cut or Les Paul players. The guitar has a mahogany body with a maple top and flame maple veneer. The set neck is mahogany as well with a rosewood fretboard. The fretboard has 22 frets and has the cool PRS bird inlays. Since this is targeted towards traditional Les Paul players it has a 24.5 inch scale lenght which is where the name comes from. The neck is PRS's wide fat profile. It has standard PRS SE zebra bobbin pickups front and rear and a PRS wrap around bridge. It has Les Paul controls with a volume and tone for each pickup and a 3 way switch on the upper bout.

This guitar has a unique feel to it compared to other PRS guitars. It has a super short scale even shorter than a Gibson. I found this pretty weird. It is easy to play above like the 15th fret but beyond that it gets way too crowded for my fingers. I dont know why they didnt just give it a 24.75 scale lenght. Maybe they already had the 245 name made up and 2475 was too long. PRS wraparound bridges actually intonate pretty well. You cant adjust it but if you stay in normal tunings they do their job well.

This guitar has more of a vintage tone. The pickups seem to be a medium output. With the short scale on this guitar everything is a bit muddy. The string tension isnt really there so you will have to fight the guitar for a bit of clarity. This problem helps the neck position thought. The neck pickup tone is unbelievably smooth because of the short scale and pickups. If you were just playing blues and jazz this guitar would be perfect for you. This is what the guitar does best with the short scale and vintage voiced pickups. The bridge pickup sounds a bit nasal in the clean setting. It has decent spank to it with a bit of overdrive. I would probably swap out these pickups if this were my guitar to keep. Something hotter with more clarity would work well.

This guitar seems to be meant for super traditional Les Paul players. It pretty much provides good tone under clean or barely overdriven settings. The short scale and and super low output pickups give this guitar an antiquated feel which some people may like. It is very comfortable to play on the lower frets because of the short scale but this makes the high frets very crowded and awkward to play on. I would have a hard time recommending this guitar to most people.
Did you find this review helpful?yesno
Cookies help us improve performance, enhance user experience and deliver our services. By using our services, you agree to our use of cookies. Find out more.