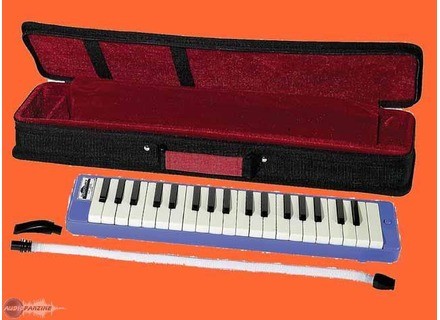 View other reviews for this product:
- How long have you use it?
a year 1 / 2 prs little.

- What is the particular feature you like best and least?
Assets:
- Comes with cover (not bad: better than my Hnher)
- Comes with hose nozzle + hard. We can therefore use either flat or fattening like a wind instument.
- Accuracy
- Sound power
- The tension of the keyboard
- The price (40 euros)

Cons:
- The sound, mostly. Compared to Hnher, there's no photo. The Hhner well have a fuller, rounder, warmer. L is a bit cheap.
Let's say it's good to work and take off-road (like beef the beach). Especially since the sound is a little more powerful than that of Hhner.

- Have you tried many other models before acqurir?
Many? No, because there is not the tones of mlodicas on the market.
I tried several cons in MODELS Hnher from home (I also possde a)

- How do you report qualitprix?
Not bad. It's really cheap, but the sound does not follow. Finally, let's say that was enough to live rptitions and small. on the other hand, for recording or live large, you should take a Hhner.
The Hnher the same size by rating against 170 euros! It is not Boxing in the same CATEGORY!

- With the exprience, you do again this choice? ...
Yes whether to replace it.
I have a Hhner smaller. I wanted a bigger mlodica but j'hsitait to 170 euros in a Hhner before confirming use.
Once that is done, I would take a great Hhner soon. Unless I do not do to a character by the factor of good grant prs from home.
But when it will be sucks, I probably would resume. was 40 euros a bagpipe that is not afraid to lug around to mop or to work in a jam at any field!

Notes:
My MODEL is black, unlike that of the photo. did when even less toy.
The "beak" is right. What is probably less Aesthetics in the mouth, but better to take a look at his fingers.
See the source
Did you find this review helpful?yesno
Cookies help us improve performance, enhance user experience and deliver our services. By using our services, you agree to our use of cookies. Find out more.