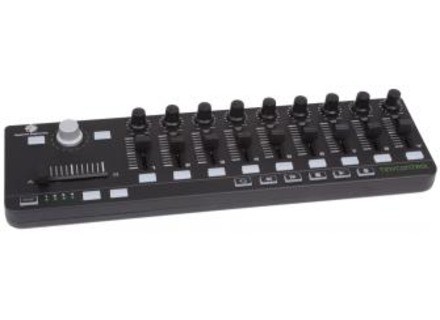 View other reviews for this product:
Motivation was mainly crossfader, the number of faders, and buttons of rotary. And of course the price (30 € at its output)
Characteristics are almost the same as the Nanokorg.
USB connection only: very good for computer music

I already have a nanokorg V1 I'm satisfied even if it starts to wear.
Here, I must say that the production is even worse, the rotary are too soft while the faders are pretty hard. In addition, they are too close to one above the other so that it gets stuck your finger as soon as it goes up the fader to max (may change the value of the button)
The worst is the crossfader (my main motivation), because it does not send any data noon ... What's the point? Is this a joke?
Another important thing, it is impossible to press two buttons simultaneously, but only one after the other (it is not "multitouch")
The configuration software is not bad, it is the same as the Korg, nothing new.

I've had 5 months, but I used 1 hour to break everything.
I immediately took my Nanokorg (see for me buy one)
I strongly recommend despite the attractive price and features.
I never would try to test more news like this (like icon that has the same kind of nano series)
In short, it can help, but I would rather use a table to seat to that of computer music ...
See the source
Did you find this review helpful?yesno