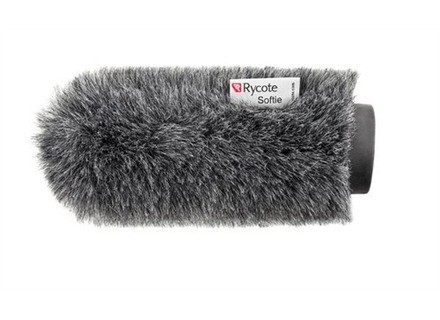 Softie, Other Accessory For Microphone from Rycote.

Rycote has announced the immediate availability of a redesigned version of its Softie windshield and microphone mount incorporating the company’s Lyre suspension technology.

As a result of the improvements, the new Softie system is described as lighter overall (a mere 145 grammes), and supposedly offers better isolation from handling noise.

Here's what Rycote had to say:

• The slip-on Softie Windshield is made of open-cell acoustic foam with an integral fur cover, and is available with two different diameters, and in a variety of lengths. The version with the Standard hole accepts mics from 19-22mm in diameter, while the Large-holed type fits mics from 24-25mm.

• The Universal Softie Lyre Mount and Bracket holds and supports the microphone whilst also providing isolation from handling or stand-borne noise. It consists of a universal clamp which accepts any microphone with a diameter of 19-25mm (including flat-sided Sennheiser models) and is acoustically isolated from the rest of the bracket by its suspension in a pair of Rycote’s non-elasticated, W-shaped Lyre webs. The Lyres have steadily replaced rubberised or elasticated suspensions across the rest of Rycote's product range over the past 18 months. The shape of the Lyre supposedly provides the exact amount of compliance required to isolate the microphone capsule from vibrations and handling noise. Unlike other elastic and rubber suspensions, the Softie Lyre Mount is more resistant to extremes of temperature, operating unhindered at lows of -35ºC and highs of 100ºC.

• The Universal Softie Lyre Mount is available with either a lightweight, ergonomic Pistol Grip Handle or Rycote’s Camera Clamp Adaptor (CCA for short). The Pistol Grip Handle is designed for handheld use, but also has a 3/8-inch screw thread in its base to allow the Softie to be mounted on a boom pole. The CCA option is for users who wish to attach the Softie Mount to a Camcorder, and fits into the microphone clamp on the side of the camera. This arrangement provides better isolation for the microphone from camera handling vibrations and Camcorder motor noise than mounting the microphone directly in the clamp. Like the Pistol Grip Handle, the CCA also has a 3/8-inch screw thread, so that the entire assembly may be attached to a boom pole if required.

The Softie Windshield, Mount with Pistol Grip Handle, and Softie CCA Mount are available for sale separately. Alternatively, the Softie Kit, consisting of the Softie Windshield with Mount and Pistol Grip Handle, is still available, now with the new enhancements. As of June 2009, the kit additionally includes a high-quality 400mm Mogami XLR mic cable with gold three-pin XX connectors at either end, further improving the isolation of the microphone from the rest of the assembly.

Availability
The new-style Softie system is on sale from June 1st, 2009. For more details see www.rycote.com.