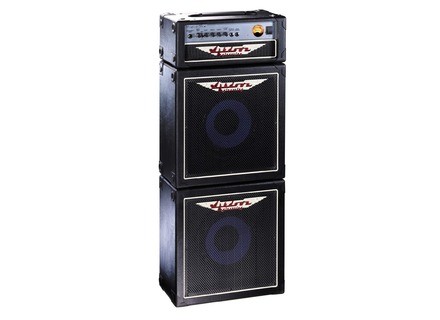 Perfect Ten MiniRig, Other Bass Amplifier from Ashdown in the All Access series.

View other reviews for this product:
Amp "stack" transistors, 65 watts. A head and two cabinets 10 "to 16 ohms each (which can s'avrer problmatique in case of failure of HP!).

Extremely simple setup, plug, play ... It sounds right away, it is!

I played mostly post-rock in a formation of six musicians. I play all the time and fingers, so no need to sound non-standard (like slap, or crunch / mediator). My two basses have found a new friend with this MiniRig ... The sound is clear (no low slobbering rotting the mix). A simple SETTING THE EQ to switch from one universe to another, which would sound more punk or stoner.

Note that the pramp passs tends to saturate the 80% gain, but if we RULES ngligeable well legalization.

A head shot, I bought the MiniRig (200 euros on a classifieds site in the form of "corner") because that Ashdown is damn good (I test many times the MAG 300 and ABM 500), and I needed an amp with a handy little power, and I do not t the! The sound is super clean ... I was afraid of the lack of power, but the 65 W transistor actually do their jobs as part of rptitions or small scnes (gauge 100).

on the other hand, in a situation "studio" is not really high. But it is clear that this amp does not place himself in the high-end home Ashdown, and is not Designed to compete with names like Ampeg or Mesa.
See the source
Did you find this review helpful?yesno
Cookies help us improve performance, enhance user experience and deliver our services. By using our services, you agree to our use of cookies. Find out more.