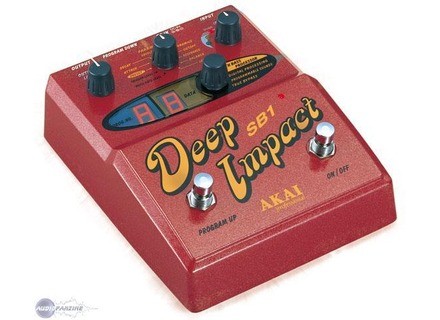 View other reviews for this product:
got it used for a couple hundred bucks... also considered electro-harmonix synth. tried the digitech synth once and it's not too hot, to say the least.

the reason i chose this pedal is because it remembers 9 different settings that you can switch between in the blink of an eye. these 9 presets come with a certain sound, but you can tweak them as much as you want, you could even make them all the same sound if you wanted to. there are plenty of knobs to twist and turn to get just what sound you want. and it does sound good. it is also a true bypass, so they say, so i rest assured that when it's off it isn't inhibiting my sound. another great little touch is that when you switch between sounds, you can browse presets and pick the sound you want to switch to before you actually switch to it, so it's great to use live.

although it's good that it's so versatile, the fact that one could get so many different sounds makes it a little overwhelming at times. it's easy to use, though, so this isn't really a big problem. as far as sound quality and user-friendliness go, it's great. the only real problems i have with the unit are in quality and construction. read on.

it's pretty light-weight, thus feels a little flimsy. i know it's nice when a pedal doesn't break your back, but it's also nice to know that it's sturdy and solid. no problems with onstruction yet, though, so maybe it's ok. what i have had are problems with it not tracking correctly. it can be testy at times. under normal circumstances it's usually fine, but occasionally, when i turn it on, it comes on all messed up and everything i play comes out the same pitch, with some really wierd stuff going on. it's a glitch, so i have to turn the thing off and on again, sometimes several times, until eventually it will come on acting normal again. this can be annoying.

so i'm not convinced that it's the most well-built piece of equipment, but it does the job for a good price. i'd say it's one of the best valued bass synths out there. i still also want an electro-harmonyx, i think they'd be fun to play with together, but i'm glad i got this one first, i think it's more practical.