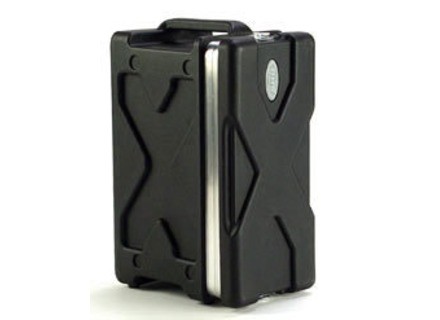 X-rack 4, Other Case from SKB.

View other reviews for this product:
I received this unit late in 2010 as the result of a trade. I needed a compact rack for a Furman PL-Plus (which I also got in the trade) and a power amp.
I currently also have a Grundorf 4 space wooden rack case that has served me well over the years, but I wanted a plastic rack for awhile now, due to the cleaner appearance and light weight and portability.

The front and rear lids attach to the rack via two small butterfly-style twist latches that are recessed to avoid getting hung up on other gear or accidentally opening or loosening. The unit also has molded carrying handles on the sides which make transporting the rack very easy, even when loaded with weighty gear. I put my old Ibanez analog delay unit in it just to test it out, and that thing's a dinosaur! (It weighs a ton). Another great feature on the SKB that my Grundorf rack doesn't have, is the addition of shock absorbing and stabilizing rubber feet, as well as indents on the top of the unit so that the rubber feet from another xrack can be stacked on top neatly and securely. This seems like a simple design feature, but it helps a lot when you don't want your expensive rack gear sliding and falling from vibrations or from your singer hitting it on stage while he's trying to kick his mic-stand like Steven Tyler!

The rack shipped with the Furman inside of it, and when I received it (it wasn't packed all that well, but then again it's a rack case so it shouldn't matter, right?) the corners on the top rack ear on either side were bent outward toward the front cover. Now, the only way this could've happened is if the courier dropped the rack case from pretty high up, causing the Furman's weight to lunge forward and bend the ears. I was a little disappointed, but I got over it quick. The rack is still functional and the Furman works just fine.

The SKB survived its first road test: UPS!! If it can survive those gear murderers (I've experienced many disheartening breaks and bad encounters with them, as have many people I know), it can surely survive gigging with my band. It's not as tough as a RoadReady or Road Runner case, but it's also much less expensive. For the occasional gigger or the bedroom player who wants to keep their gear looking great and organized, give one a try! If you have expensive gear that needs ultimate protection, get something sturdier with shock absorption.
Did you find this review helpful?yesno
Cookies help us improve performance, enhance user experience and deliver our services. By using our services, you agree to our use of cookies. Find out more.