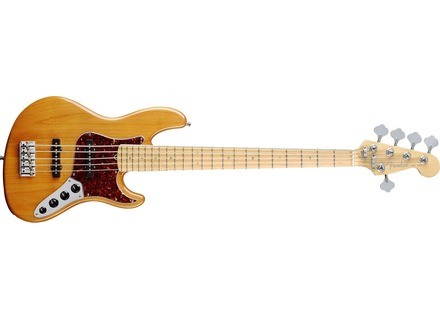 View other reviews for this product:
Completely manufactured in the United States we are well attended by the classic Jazz Bass Active. standart bridge, pickups noiseless preamplifier 18 Volt. Bass and treble settings mediums volume + balance neck / bridge. the handle to the key 22 in Rosewood immediately gives a vintage feel.
most: comes with cleaning kit / tuning and belt with "straplocks."
one unfortunate detail: the attachment belt equipped Straplock side handle is paurte to false and unscrews chronically. it is normal to tighten the screws when the violin is new (the wood takes its forms) but it should only occur once or twice, but now it seems problematic even if we lose the attention on risk damage the thread. damage at this price ...

The factory is a little too "vintage" string spacing (it is a "4 +1"), action too high. after a quick adjustment found comfort and low down on the action without too much problem, but the purchase of a replacement bridge seems to me to consider for those who like to groove without killing your fingers!
access to the treble is good but it is anyway not a criterion detrminant when buying this kind of low. The weight / balance is perfect, the dress is very "close to the body" and your back will thank you!
First test via a DI in a Mackie Hu8 through a MOTU interface: the sound kills outright! The preamp does its job perfectly, all settings are exploitable and is navigated with the happiness of his "Pasto" in this medium and its carved and dynamic slap "on Marcus." the grain is everywhere and gives this bass its character (and who made an instrument of legend). With a second assai Mindprint DI as a: the grain becomes énôôrme (too?) And we say it twice preamplifier innutile of the microphones on stage ... the third test (finally!) Technicians his will thank you to send such a signal in console: the signal is clean and free of parasites, even by releasing the ropes (thank you noiseless!) If the serious down happily in the subs, the grain is there despite the Equal right of the console back, the dynamic is enormous and I quickly forget the absebce amp ..... too easy: it's happiness!

This low, thanks to its preamp effective, is comfortable in all styles, sometimes through setting (see above), but his versatility does not sacrifice his personality: it is not for nothing that almost all bassists Jazzbass are not very far in their equipment. in studioje still uses "ID", more rarely through a preamp, same thing on stage in a club and EBS 4 * 10 with a faithful response perfectly suited to the electronics of the instrument affirmed.
The sound is round and granular at a time (two microphones) can be soft as desired (neck microphone), or singing "how to pastoral" with micro acute. his palette is so extensive that it is difficult to describe all the possibilities of active Jazzbass.

She follows me for three months and has become my main instrument, having had a Kopo, a 5 string Peavy, a vintage Jazzbass 62 (aaargh. .. what a shame it was a loan !!!!), a musicman 5 strings (rock too!): it has so far not been in default.
only regret (apart from the small detail of the attachment strap): a factory setting, but too difficult to play the violin can easily be the setting of "house" through a little know how. I suggest you a passage from your favorite maker a few months after purchase.
The quality / price this low, given the concurrency and its perfomances I think is exceptional, which is not always the case with Fender (custom shop, signature models, amps ...)
I would do not only this choice but I can also say that I will never go away too far from a Jazzbass, on stage and in studio, I promise!
See the source
Did you find this review helpful?yesno
Cookies help us improve performance, enhance user experience and deliver our services. By using our services, you agree to our use of cookies. Find out more.