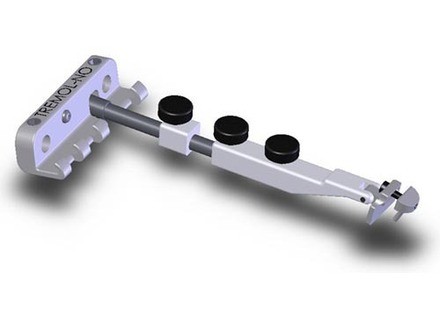 View other reviews for this product:
Unlike the guys that made term stops before this one actually works. And works well. What is it? It's a device you install in your guitar. I hooks into one of the holes on the term block where the trm springs are attached. So 5 spring guys are out of luck. And replaces the term's claw with the tremolo-no propriety version of it. Where the shaft assembly is mounted.
It;s a rod inside a tube with two locking nuts (knurled thumb screws) to lock it.

Why?
Simple when you have a floating bridge and break a string all strings are out of tune and it's time to change your guitar mid song. There were devices before as I said like the Hip Shot trmesetter or the Rockinger version that did that. However with those unlocked you couldn't do the things that are the reason to have a floating bar, like Brad Gillis/Jeff Beck style whammy warbles. With the Tremol-no you can.
But it doesn't just lock your bar to let you do all those Country bends where one string stays stationary while you bend the other up that are never in tune on any term equipped guitar since as soon as you put more tension on one string (bending it) the other strings tensions lower and their tune goes flat.
So...locked you can do all that, including behind the neck bends, assuming it's on a guitar sans locking nut. AND then you can set it as a term that is flush to the body, meaning you can only lower pitch ala Van Halen. Which still gives you more sustain than on floating bridge.

Simply put the bottom-line here is this...if you use a flowing term this little device is in my opinion a must have. The only issue I found with it is that the screws come out a bit easy when they're unlocked. But a bit of grease on them held them actually in place. After one too many times crawling around looking for them on the floor.
Did you find this review helpful?yesno
Cookies help us improve performance, enhance user experience and deliver our services. By using our services, you agree to our use of cookies. Find out more.