Other Shape Guitar from Danelectro

We proudly present the fourth generation of 1959 Danelectro DC. The first, whose trade name at the time was the model 3021, was manufactured in the USA in 1959. Since then, production has been relocated to Asia. The second generation was produced in Korea from 1998 to 2001 with the Danelectro 59-DC Standard and the 59-DC Pro. The third, was Chinese-made in 2007, and, finally the model presented in this review, is also manufactured in the Middle Kingdom of Asia...

Once Upon a Time in America

It is the United States in 1954 which gave birth to the Danelectro brand in the small seaside town of Nepture in New Jersey. Before launching his own proper range of products, Danelectro manufactured and subcontracted amplifiers for Epiphone. For many of the guru’s 6-string apprentices who wanted to caress the first electric instruments, the Danelectros were easily accessible via mail order catalogs inexpensively, or in any case much less expensively than the big brands at the time such as Fender or Gibson, the eternal rival. For example, in 1954, a basic Danelectro cost $69 versus $200 for a Telecaster. Today this makes us dream a little, hmm?  But either way, for musicians at the time, the choice was quickly made to the original east coast brand. 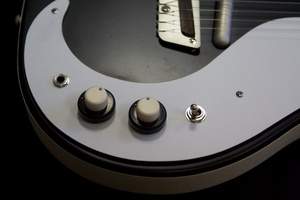 If guitar shape is identical to the original edition, very close attention was nevertheless paid to errors in previous editions. After all, why not make something new, based on the old, but better?

The instrument grips very nicely. Like the original, the DC-59 is very light. The Masonite body (a type of plywood) is glued on a hollow wooden frame. Though not connected, it sounds incredible. The characteristics of the guitar craftmanship may suggest an instrument of rudimentary built, but it is precisely the simplicity of its building materials that give it its characteristic sonic color.

The neck crafted in maple with a rosewood fingerboard is very comfortable to hold. The model that we were given, however, deserves a little drop of lemon oil to unify the color of the wood at the fingerboard. The neck-to-body connection is perfect, which will provide more sustain and resonance to the instrument. The neck has 22 jumbo frets properly inserted and the finish on the back of the neck is painted with the same matte painting used on the rest of the body . Nothing to complain about regarding the finish! The double cutaway allows for a fast, accurate and comfortable high register of the instrument. The head was inspired by the shape of a famous brand’s beverage bottle. Yes, you can look elsewhere for models of time with these head shapes on the market affectionately named the “Coke Bottle” collection. It seems like the guitar was destined to be played by the bottleneck! Like anything, there are always explanations for legends … The chrome fittings on the first Korean edition in the late 90s is now an aluminum brushed on the new model. Question of taste, we like or dislike! This last detail is less noticeable, but still simple and very distinguished!

The saddle is very stable in aluminum. It is screwed and not pasted in the fingerboard spillover. As a consequence, the adjustment possibilities of the instrument are unfortunately greatly reduced. You can adjust the height of the bridge, but also – adjust the height of the bridge… No other settings are available, as a consequence intonation is not perfect, but for the price that people are asking for…

The pick guard, unique, adds a nice touch to this guitar. Note the unfortunate removal of the “hatch” on the back of the instrument. It was a good practice on old editions to re-tighten the nut on the output jack or to correct a potential problem of loose solder. With this model, you will have to remove the shield entirely… recommended only to handymen looking for a challenge.

We also miss the covers that came with the reissues of 90s, at the time, and more over, the mini travel amp that was thrown in for good measure… times are tough!

Now for the pickups … 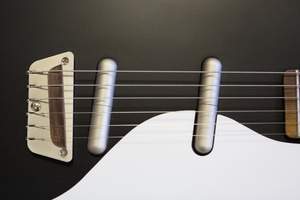 Ah, those famous lipstick pickups! Originally, its creator, Nathan Daniels, bought a bankrupt company with its stock of lipstick metal packaging and used it as a shell to make the pickups for his guitar.

To reduce the Danelectros’ development costs, the pickups of all brand models are identical: a single winding, protected in a metal casing that gives it its very twangy sound, just as a Telecaster bridge acts like an iron cage giving it a dry sound quality. Note that this model has a warmer sound than the first re-issue, which is likely due to more copper coil turns on the pickup’s magnet. This gives them greater amplitude, heat and above all roundness of sound. This fatter attribute gives these models a much better response in crunch or overdrive than the original models. The pickups are height adjustable with two screws on the back that cross the entire width of the body of the instrument. The pickup cavities and the pick guard are armoured (as stated in the inscription above the neck: totally shielded) so no problem of buzz at the exit. 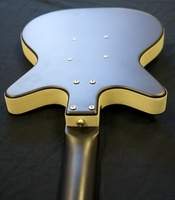 The cream colored center dial allows you adjust the volume, while the wider darker portion of the dial sets the tone. This design, unusual, and very original, proved to be very functional and practical. A three-position switch allows for 1) only bridge pickup 2) both pickups in series (very interesting and unusual) and finally 3) only the neck pickup. In position 2 we cannot bypass further the pickup tone as with former DC models.

Positions 1 and 3 are equivalent in output level. However the 2nd position is much more exciting with the combination of both neck and bridge pickups to have a thicker, but especially a greater level of output.

In position 1 the cleans shine on.  They are highly crystalline and brilliant, though sometimes a little spicy to the eardrums in the treble notes. To avoid this unpleasantness, you will have to make sure to adjust the tone to avoid the clacking quality that can very quickly turn to screaming!

Position 3 is warm and round. We can see here the work that was done by the technicians on the pickups over previous editions with more coil turns. A real treat for blues soloists!

For my taste, this guitar is definitely worth a visit in the 2nd position, which for me remains the most performance efficient and most balanced. We may adjust the level and tone for each pickup independently of the other to refine accurately the mixture of both.

The icing on the cake is that the guitar is a real treat in crunch tones in all positions! We find that these sounds immediately remind us of the Telecaster, but with a cavernous deep quality which remains quite impressive and has never been equaled in the history of electric guitars craftsmanship. Small precision, the pickups do not stand up to metal and everything else that requires a hyper saturated sound.

Here are the sounds made with the amp The Valve 2|50–1 plugged into our Two Notes Torpedo VB-101 which is plugged itself into our RME Audio FireFace 800. 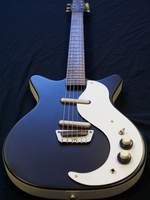 For a very nice price ($400), we have a quality Danelectro guitar with a fine and delicate finish playable by fingers and/or slide. We cannot say that Danelectro is a versatile guitar that can be used for any type of music, far from it. The clacking sound prevents this model from venturing into some softer genres such as jazz or even thicker such as the metal. For fat sounds, forget it.  But on the contrary, when it comes to fine sounds, sharp as a razor, you’ve come to the right place. Warning- this may make your ears bleed! For those who have never approached the legend closely, a test is certainly needed. Be wary though of impending addiction: when you buy a Danelectro, you want the entire collection! Let the Dano rule !
Pros
Cons
About our reviews
Comments on this article (2)