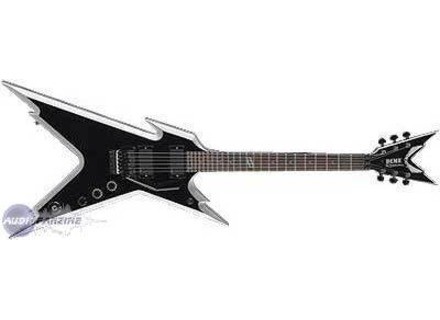 View other reviews for this product:
The characteristics of the animal are relatively similar to those of standard Razorback, mahogany, rosewood, maple a few for fun ...
Feel free to take a look at the previous test for more info ...

The big difference comes from the hoop and electronics.
Here we go on the EMG, but what changes most is the handle 24 cases.
Aesthetic level, the only change comes from the indentations, which are white instead of gray.
Personally, I prefer ...

- 10: why put a different note while the guitar is almost the same? Just because the high-end electronics on this guitar embraquée corrects only two black points raised by the standard model. Everything is there, nothing wrong ...

The handle 24 cases is not a criterion for better or worse, just a difference. some prefer, some not, but it's roughly the same molo sleeve, with a radius and a slightly larger scale of course ...

The test was in fact centered on the handling of 24 cases and of the Operating Your EMG.

I was pleasantly surprised by the comfort. I expected to have observed a period of adaptation but Neni!
The visual changes a bit and I happened to be wrong in the ranges of degrees two or three times the force of habit. The 24 cases does not provide much, if not greater ease for the game at the top of the handle and can get the bends a little higher, but otherwise ... ... baaaah

The sweep-tapping fans will have a range of play a little wider, but the 24 cases is generally not a revolution. Those who are attached to keep their habits but for the average person does not change much.

The main difference between the 255 series and is standard here in the mail. Unlike 1ST versions, 255 are mounted EMG 81/85, loading on conventional models.
The sound is incredible, it grows really loud, it sounds full and well that sure it does not bleed. The 85 is extremely fun to play lead, where the Dean Zebra standard was to be avoided. All the harmonics emerge well without the microphone is too severe. The set makes perfect grades without punishing every encartade. The clean sounds ring EMG, ie a little dry saw the righteousness of the sound and it will not hesitate to push a little reverb and mid to warm up the whole. The violin sings a lot less because of the active and you can hear.

What should be noted is that a micro is a micro active EMG and sound really is not obtained in the same way with a liability. Take a look at the tests of EMG's because the use of an asset worth a post all to itself ...

- 10: So good balanced microphones, right, precise and rather versatile if you have an amp worthy of the name behind. Connoisseurs will find their marks on the microphones, the novices will appreciate the ease of use and accuracy of the set.

The final rating is intended as a comparison between the standard 255 series and Razorback ... The main weakness of the neck pickup was standard (and mostly not at all knobs progressive). The violin does not change an inch apart from the new white stripes and the handle 24 cases that does not have much in the end. The active set gives an interesting vraimment made, the EMG are no longer present. My only regret is that these pickups do not really sound the wood and prefer the sound of the amp. In fact, it does not take advantage of the excellent violin proposed.

Therefore I put 10: j'estimme this series more successful than the standard series as better equipped. A neck pickup worthy of the name would Vallue both models the same note, but the electronic standard is much room for improvement. Then it's a matter of taste. The 24 cases in my opinion is not a real selling point, unless you use it effectively.
The reason to buy this kit EMG, and eventually finishes, which are not consistent from one series to another.
See for yourself so if you like the assets or if you prefer to work your sound with passive pickups.
See the source
Did you find this review helpful?yesno
Cookies help us improve performance, enhance user experience and deliver our services. By using our services, you agree to our use of cookies. Find out more.