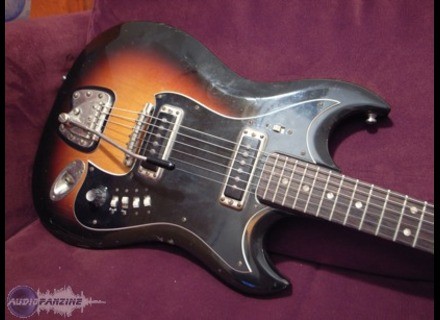 HII, Other Shape Guitar from Hagstrom in the H series.

The Hagstrom II is a vintage electric guitar that is from the 1960's. This is a Swedish made guitar, as Hagstrom is (was?) a company from Sweden. The guitar has 22 frets, and a two humbucker pick ups. I don't know what types of materials the guitar is made out of, but it's a pretty sturdy instrument. It's also got a whammy bar.

The neck of the Hagstrom II has a really low action, and it's very easy to play. Playing either rhythm or lead is pretty easy and using the Hagstrom II isn't difficult at all. Each of the two pick ups has setting controls for both volume and tone, in addition to a switch to choose between them. It's a pretty light guitar in terms of weight, and has a unique body shape that is somewhat of a mix between a Strat and an SG.

While the sound isn't on par with high end Fender guitars, the Hagstrom II still has a great sound in it's own right. It's possible to get a good amount of differing sounds between the two pick ups, but I wouldn't say that it's the most versatile guitar around. I've used this guitar with a Fender Twin Reverb amplifier for the most part, and it's definitely a great sounding combination. I would say that the Hagstrom II is more like a Telecaster in that it's best for rhythm, but at the same time it sounds great for lead parts as well. I didn't use the guitar with any effects...

Hagstrom had a great line of guitars of all different shapes and sizes, and amongst them is the Hagstrom II. While I can't say that I like the II as much as I do the III, the Hagstrom II is still a great overall guitar. It not only has a great sound and is easy to play, but definitely has a cool look to it as well. While when these were made they weren't all that expensive, they aren't as cheap as they once were since they are somewhat of a collector's item now. Even so, they aren't all that expensive used if you're looking for a really cool vintage electric guitar.
Did you find this review helpful?yesno
Cookies help us improve performance, enhance user experience and deliver our services. By using our services, you agree to our use of cookies. Find out more.