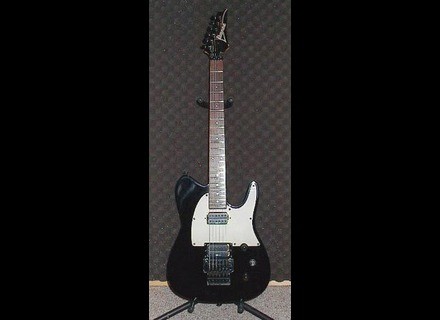 580B Ballback, Other Shape Guitar from Ibanez in the Roadstar Pro series.

View other reviews for this product:
This is a guitar that not many people know about in the Ibanez line up, and it's mostly because it only lived for about a year before being discontinued. The guitar was based off of the Telecaster design more than the Strat design, but it was still part of the Roadstar Pro series. The guitar features a modified Telecaster design mahogany body, a maple neck with a rosewood fretboard and 22 jumbo frets, dot inlays, original Edge tremolo, two humbuckers, a wooden pickguard, one volume, one tone and a three way switch.

The first thing I should mention about this guitar is the neck. This actually has the Ultra neck which is about 2mm thicker than the normal Wizard neck. The extra meat gives your hand something to grab onto vs the Wizard which kinda leaves a slight gap because it's so thin. The fretwork itself is still the same on these models in that it's decent, but Ibanez is doing better than before thanks to the Prestige line up. The body is a little more ergonomic than a normal Telecaster body, which I found to be cool. The tremolo on this is also the best tremolo ever made, and Ibanez still offers it to this day on special guitars.

The pickups are this guitar's biggest killer. The bridge pickup in this is kinda flat sounding overall, and I find it doesn't really fit the mahgoany wood that it's put in. It's almost like it was made for basswood instead. Under gain, it lacks the clarity that I look for. Under cleans, it's just a bit dull. The neck is very similar in that it lacks dynamics. If you ever get one of these, I recommend replacing the pickups with something else. DiMarzio and Duncan both have some great, affordable pickups that will really bring this thing to life. They also don't cost an arm and a leg like some of the more boutique pickups out there.

While the looks are kinda odd, it's still a solid guitar. It's too bad that these are hard to find as I think more people today would be willing to play them than before. If you ever get one, pay attention to any possible neck cracks as it's pretty common with the way the locking nuts are mounted on these guitars. Too many people crank down on the nuts and cause the neck to crack. Also, if you get one, swap out the pickups for something better sounding.
Did you find this review helpful?yesno