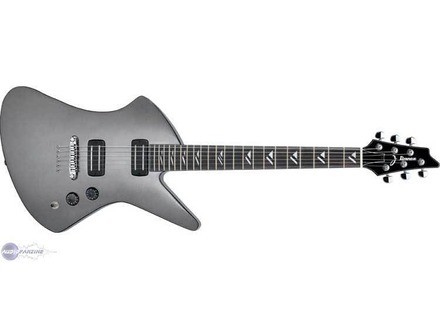 ADD120, Other Shape Guitar from Ibanez in the Arondite series.

This is yet another guitar in the trio of guitars that Ibanez released in 2007 to help appease those who were looking for a more extreme guitar. The guitar itself is based off of a quasi-Explorer style guitar. It has a mahogany body with a maple top, a set mahogany neck with a rosewood fretboard, 22 frets, some unique inlays, a Gibraltar III bridge, two humbuckers, one volume, one tone and a three way switch.

This guitar is pretty bad. The fretwork on this wasn't that great at all, and it's not a true representation of Ibanez's quality. The frets themselves were sharp and needed to be re-leveled. There were some high/low frets that needed to be addressed, and they're especially noticeable once you start lowering the action on these guitars. The nut on this was also causing some tuning issues and should have been recut. The bridge on this isn't too bad, but that's not saying too much considering all that went wrong with building this guitar.

The pickups in this are pretty hot, and I find they're very bright. Some people might like them, but they're really not that great. It's like they wanted to build some sort of X2N clone that doesn't sound anywhere near as good. The bridge model was bright, and it had lots of output. It's really not good for anything but high gain. The neck pickup was bright, and I'm not a fan of bright neck pickups at all. I do lots of legato, and those brighter neck pickups always sound too stiff and sterile. If you're going to keep this guitar, i recommend doing a pickup swap.

It's not a high quality guitar, and considering what you get for the price, you're better off spending your money on the used market. You'll get a much better band for your buck. You can get some old school MIJ RGs that absolutely destroy this thing for around $300 to $400 on the used market.
Did you find this review helpful?yesno
Cookies help us improve performance, enhance user experience and deliver our services. By using our services, you agree to our use of cookies. Find out more.