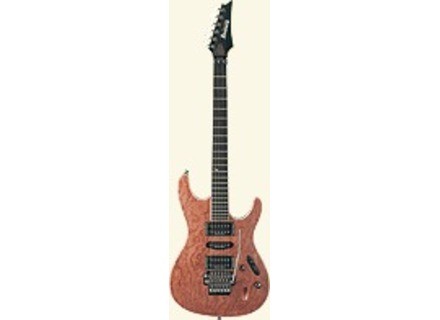 This is an S series that Ibanez released with the new Zero Resistance tremolo that they made. It's a pretty cool tremolo, and it's been used ever since on the S series. The guitar features a mahogany body with a figured top, a maple neck with a rosewood fretboard, 22 extra jumbo frets, 12th fret dot inlays, an Ibanez floyd rose, HSH configuration, one volume, one tone and a five way switch.

The first thing I'd do would be to rip out the electronics and replace them with something higher quality. Once you do that, you'll have one amazing guitar that'll destroy quite a few of other, more expensive guitars out there. The neck is great, the new bridge is cool and the overall guitar just feels super slick. I recommend checking it out if you get the chance.
Did you find this review helpful?yesno
Cookies help us improve performance, enhance user experience and deliver our services. By using our services, you agree to our use of cookies. Find out more.