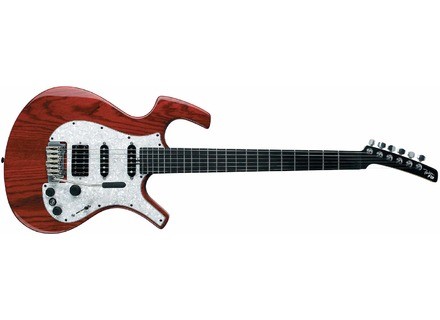 P-38, Other Shape Guitar from Parker Guitars in the P series.

View other reviews for this product:
The Parker P38 hybrid is certainly the best designed of all time. all rooms that make up it comes straight from the United States and are mounted kore (for a price drop, you will understand). finish is very good. it weighs less than 2 KG (very pleasant when you have a 3 hour concert repertoire). sounds are exeptional and come home PARKER. the handle has a rosewood fingerboard of the highest quality (very few scratches like ebony) and comprises 10 percent carbon.

It's been several months since I have the pleasure and honor to play on parker and honestly, the difference between FLY and P38 is more than minimal. It consists of two simple microphones (Parker), double (Parker) and a Fishman piezo. the whole is of course active, since all the system is powered by a preamplifier (itself powered by a battery 9volts) fishman.Un 3 position knob selects for the desired config (microphones, piezo, or a hybrid position halfway between electronics and acoustic). they have more a 5-way switch (used in hybrid mode and micro), a piezo volume (used in hybrid mode and piezo), a micro volume (tone used in hybrid mode) and tone (which serten mode hybrid and micro). All this to say that it is a exellent guitar deserves is of interest. The piezo sound out a beauty equal to a "real" acoustic

The P38 is a guitar for every playing style (I am mainly metal) and electronics have no problem what you asked. obtained in the neck position sounds worthy of the round and velvety fameus lacecensor of F. .. st and bridge (humbucker) of distos has pantera (with still a good setting on the BOSS GT8).

There is nothing to say about this guitar except that it does not have a driver but a race Bolt. the price is also regrettable, since for a "low-end parker" would cost 1000 euros. but it (for my taste), fender and sprayed company. I put 9 in total for two reasons that I have to state
See the source
Did you find this review helpful?yesno
Cookies help us improve performance, enhance user experience and deliver our services. By using our services, you agree to our use of cookies. Find out more.