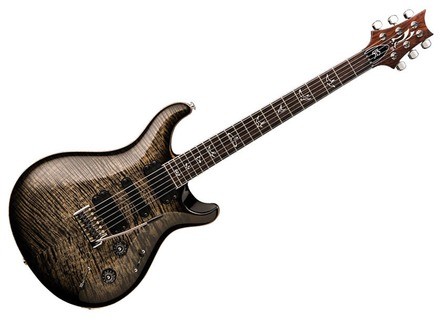 Value For Money : Excellent Audience: Advanced Users
I am a guitar player since 1979, 40 years of playing countless electric guitars. I started from the very bottom with low budget guitars, in fact my first "great" guitar was a Fender Strat Plus in 1993 (which I still have). But being an old rock lover I always wanted nothing but Fender and Gibson. In fact my favourite ones were the Les Pauls. But back then Gibsons weren't the most affordable ones to buy. I bought my first Les Paul back in 2011.
I'm talking about all this background because in the year I'm doing this review (2019) I had the luck to introducing myself into the PRS realm.
The 513 is my second PRS guitar, because in january I pulled the trigger for a Custom 24 (which made me think on what I was doing all this time).
I was real lucky to buy the 513 on May and I need to say this is my best guitar up to date.
Just to begin with this I need to refer to the overall quality of the instrument. The action, the feel, the playability, the sounds, the looks...
This guitar has everything you would need and more. It has 5 pickups that are matched in the style of an HSH guitar.
A really cool feature that the sounds brings is the fact they can do a very wide variety of sounds. You can get beautiful twang from the the combinations, and when in single coil they sound chimey and full.
You can do up to 13 sounds due to the clever 2 blade switching system in where one blade has 5 positions figuring the classical strat combinations. The other blade has 3 positions and it's for changing the way the "humbuckers" combines. In these 3 modes you can switch between 1- Heavy humbucking: In this mode the humbuckers are connected in series, which gives it a darker and fatter sound. 2- Clear Humbucking: In this mode the pick ups are connected in parallel, so they will sound full, but quite cleaner. 3- Single coil: In this mode the guitar acts like a classic strat, but don't expect a classic strat sound. It resembles it but it has a modern twang, maybe a boutique sound if that make sense. You can make it sound great no matter the tone and volume are. The center mic is always in single so when you make the cominations they will stay the same in the position 3 of the 5 blade switch.
Reacts great to overdrive, distortion and any FX you would like to use. Lots of sustain and the tremolo bar stays in tune so well.
The guitar is very comfortable, maybe the most comfortable that I've ever played. The finish is something really awesome, just putting the hand on the neck and you will know what I'm talking about. That is PRS.
Another remarkable feature that I would like to say about this specific guitar is the fact it really has its own voice. You can recognize the sound of a Les Paul, a Telecaster...this one has a 513 sound. This is the 513, by 2016 or so this guitar was discontinued, but if you are serious in the music business and you see one used don't hesitate and go for it! it worths every penny, you will not regret it, this guitar is a keeper!
PROS: Just about everything mentioned above!
CONS: If you're low on budget it will not be an option.