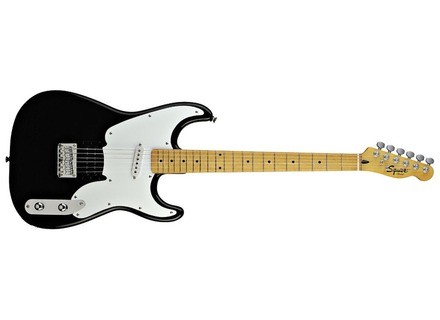 View other reviews for this product:
Squier is the entry level with the MODEL, so I guess its Asian manufacturing
22 frets
Two microphones: a simple oblique (Channel) and a double splittable (Raise the Volume button) in the bridge position
Micro configuration (the second button is a switch) Channel / Channel + Bridge Single / Bridge / Single Channel + Bridge Double / Double Bridge)
Fixed bridge (I think, I only use rarely trs vibrato and I have not checked)
Volume 1 and a Roto-Switch (adroute to beginners, but few guitarists who use their Guitar Tone)
pais handle more than Fender, round profile

The handle is enjoyable despite its thickness
The acute and Access in the same as for a stratum
I tried sitting, it remains stable without dsquilibre
The sound is OK, without being transcendent: it was 5 with tonal possibilities carractres Marqus

This is a guitar that incorporates the principles dear Lo Fender: Simple and effective
The blues is simple and twice more rock, which makes us versatility. APRS in an amplifier or a multi effect sound is primarily what makes electronic.

I just tried in the store. j'tais liked its looks, the micro config and price
The violin is trs correct, the microphones are somewhat common. report quality / price exclent.
This is a guitar that you can buy or Premire deuxime guitar and a microphone can change that long custody
See the source
Did you find this review helpful?yesno
Cookies help us improve performance, enhance user experience and deliver our services. By using our services, you agree to our use of cookies. Find out more.