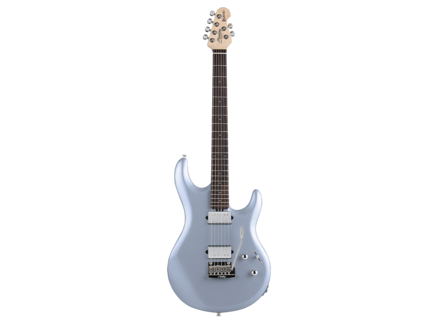 Luke LK100D, Other Shape Guitar from Sterling by Music Man.

If I understand correctly, this branded MusicMan makes the parts in the USA and then assemble them in Indonesia and return the products to the states for quality control.
Di Marzio pickups 22 frets
Mechanical block chord
Active electronics with boost

Nice run I am on the variety so I looking for a versatile guitar.
A bit lost with acute because I used to play in 24 cases, but still remains accessible.
Precise vibrato significant boost but optional.
Small flat, rod vibrato mind a little boost when the button is released (the button hinder the passage of upper: /)

I play on a line6 modeling ...
A magical and highly crystalline clean with the neck pickup. I saw!
By-cons I have a little on my hunger by going into overdrive. Although accuracy and sustain await you, the general quality that emerges is not stuck me.

I may be limited by the amp but I have not managed to get a fat sound so for fans of metal that might be a little 'just'.

I tested it for one week now but have not yet purchased.
Read some reviews, we talk about copying almost identical to the model LIII MusicMan and that one almost forget the differences between the two models. I could not compare the two but I confess that instantly I was expecting something more wow. The finish is correct, by-cons boost button was dead from the beginning which makes me think that the quality control is not necessarily in place and this is + a marketing plan than anything else ... ( unless my music store I screwed up without telling me

)
Its value for money looks good to me (not very good

) for a guitar to 1000 € anyway ...
I do not know yet if my final choice will be on this but it is still worth a visit.
See the source
Did you find this review helpful?yesno
Cookies help us improve performance, enhance user experience and deliver our services. By using our services, you agree to our use of cookies. Find out more.