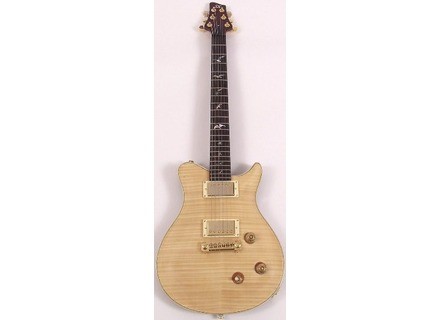 KY1 CUS 22, Other Shape Guitar from Sx Guitars.

The SX KY-1 is a double cutaway PRS styled guitar. The arch top body is made from solid mahogany and has a real maple flame top. The set neck is also made of mahogany and features a rosewood fretboard and has 22 jumbo (2.7mm) frets. The guitar is a 25 inch scale and features “birds in flight” inlays going up and down the fretboard. Two covered humbucker are selectable via a three way toggle switch and are adjustable using the single volume and single tone knob. The KY-1 has gold hardware and gold dicast sealed tuners. Body binding compliments the natural flamed maple top. Width of the nut is 1 5/8” and the weight is around 7.5 lbs. The guitar came setup with 10 gauge D’addario strings.

The SX KY-1 looks like a Fender Telecaster had a child with a PRS custom. It looks more like the PRS than it does the tele though. It has a very unique and honestly cool looking body that is both a little strange, but fresh and not overused. I think SX did a good job coming up with a new looking body style without going too far out there. The action on this guitar came set very high from the factory, but it wasn’t hard to tame down. It has a one piece tail piece so adjusting it to the correct height is a piece of cake, but nailing the intonation was a little difficult. The setup was not nearly as good as my Agile from the same distributer, and miles away from the PRS it tries to copy, but it was manageable. Odds are it will need a little tweaking out of the box so plan to invest a little time or money into that. The tuners on this guitar are just generic tuners, but they seem to work fairly well. The construction and design of this guitar are just great. The birds on the fretboard are done very well with very little filler needed. Access to the upper frets is great and the guitar sits well while playing. The neck is on the thicker side, but I like it. The woods used on this guitar are nice. I think the mahogany back looks even better than the flamed maple they used for the face of the guitar, and while I usually don’t care for gold hardware, this time it looks classy. Wipe the guitar down well after use though, because it doesn’t take long for the cheap hardware to tarnish and corrode.

The guitar sounds pretty good. It doesn’t have the low end chunk that a LP has and it doesn’t have the quack of a Strat, but it sounds very much like the PRS style of guitar it’s copying. It doesn’t play as nice as my PRS SE, but it looks the part and sounds pretty close. The humbuckers are a little generic sounding, but SX had to cut corners somewhere. The tonewoods they use sound good and vibrate well as you play. I upgraded the bridge pickup to a GFS Fat Pat and I’m liking the results, as it gives a little more sustain, low end, and meat to the tone.

Overall I really like this guitar, but I haven’t fallen in love with it. I look at it and it is a sexy centerpiece, but when I play it I just haven’t found my comfort zone on the neck. It’s possible I just need to spend a little more time setting it up. It looks like a million bucks but it still feels like a cheaper guitar for some reason. The guitar is made out of good woods, the hardware is on the cheaper side and the pickups could use an upgrade. I probably wouldn’t get this guitar again, unless I was willing to put a little money into those upgrades I listed. My PRS SE plays great and is a better guitar in every way, but I don’t vibe with the feel of it 100% either, so maybe it’s just a scale length issue. I love my LP’s. I think the guitar is well worth the price, and if someone is looking for a PRS styled guitar and can’t afford the SE line, this would be the first place I would point them.
Did you find this review helpful?yesno