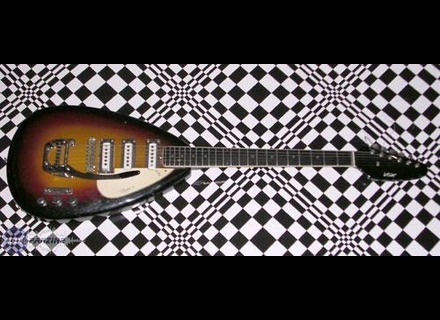 Teardrop Mark 6, Other Shape Guitar from Vox in the Teardrop series.

This is a guitar after that of many people will be in 1968. (My word)
manufactured in UK.
For micro ca chui I do not know to go see: D
Then for the bridge is strange there are several depending on the model I do not know what brands you they are or even what type.
For the settings we have:
1 microphone selector 3 positions
(1/son serious but still clean 2 /'s very dry rock that recalls the sixties 3 / serious but with which it is recommended to be used for a more rock metal show)
1 tone controls
1 volume knob
So for me I did not handle the original (too bad) but there is no trouble with the mine has 22 frets.
I put 10 because I think it's great guitar at any point (notice stricetement staff: D)

Then on this subject is really the feet seen the shape of the body not bother to tell you that access is more acute as more easy it is for a sub emcombrante and is relatively light.
Seen from the point of his is very easy to grip by working regularly with the beginning you get used easily and you get get something a lot

His sound will appeal primarily to the rockers, the best metal there is more than enough but you have to have an amp with enough potatoes I tune to a 8040 Marshall Valvestate it really is not bad. the second position has a sacred sound, dry enough that you can combine a wah-wah (that's a very sixties sound like I said a little higher: D)
the 2 other two types of sounds are warm and round or you can play quiet songs ect ....
by against the third I recommend that want to have a sound saturated as it is said: a sound very difficult to describe the acute and severe crystalline st st see heavy fat according to the note.

It's been almost a year I have and I never tire of it. very original receipt as it's appeal to those who want originality and to rock
it has no default can be coded by the fund must be relatively fragile (I've never fell but made do when even care especially to micro)
it seems that new costs the time the equivalent of 2000 euros although is is a good guitar that's relatively expensive
mio I pay 190 euros a thrift store ds dc I will not complain about the price: D
I would do if I were to choose volontierce it again
See the source
Did you find this review helpful?yesno
Cookies help us improve performance, enhance user experience and deliver our services. By using our services, you agree to our use of cookies. Find out more.