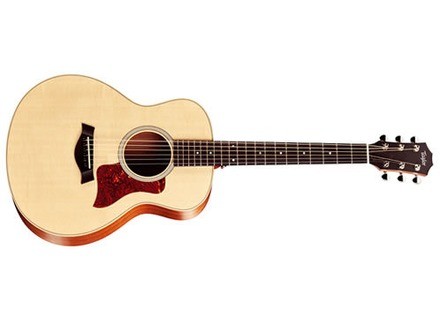 GS Mini, Other Steel String Guitar from Taylor in the GS Mini series.

« Beware of high saddle and its spacers »
3

Value For Money : Correct Audience: Anyone
View other reviews for this product:
I bought it brand-new in 2018 and played few hours a day, then after 3 months my ears are too tired of trebly Taylor sound that I had to pause my guitar practice for a while. Eventually, Little Martin saved me (I got Koa model) but I wondered why my GS mini was so difficult. Before selling it out, I considered changing saddle as one last experiment (I had changed strings, picks, bridge pins).

To my surprise, low E had almost 3mm at 12th fret - no wonder I couldn't tame the long sustain

The volume was way too loud for my apartment, too.

Then, true surprise came. There were 2 piece of .. paper? came out when I removed the saddle. Each one is almost 1mm thick when not pressed down. I removed them and put the saddle back in, then - voila! String tension got sooo much lower, so does the volume. No more sustain issue when strumming!

I have no idea why those spacers are placed under saddle, and wish they could made it only one piece of paper which would make it medium hight. It was hard to realize for a novice player like me, and I learnt it hard way.
I see "Taylor is too bright at times" comments generally everywhere. If it's something that's gonna hurt your ears seriously (and not about nice rich mid-high), check under saddle!! Not sure if it was only mine, but I saw at least one more case online (yes, exactly the same, 2 pieces of paper).

Now, my GS mini is amazing for strumming and finger picking - basically everything! My journey with Taylor just got started over