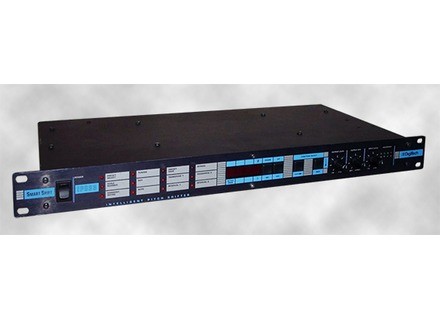 PITCHTRAQ, Other Studio Effect from A/DA.

Harmonizer digital 1U rack with an entry that fits what you plug in, the guitar synth.
No edition pc, or noon, 4 * 4 * + 4 user memories four factory presets

Connectivity: All about TS, input, output, no effect, effective, making the switch which enables ADA to change his foot, and an insert for the REGEN I will talk about later

No xlr, it's going can be discouraged by some, me fits me.

Super simple setup, no menus, everything is accessible from the front:
pitcher can sound up to + or - one octave increments of semitones or hundredths or intervals as classical minor third, major third, four, fifth, sixth etc ...
An adjustment to the level of direct sound, for a purpose, for a regen.
So far nothing very special but this is where it gets interesting!
1) It has an internal oscillator which modulates the transposition and a sinusoidally -1 semitone, so it's going to the chorus (because it was a mini lag due to digital) to stuff enough barges
2) The regen is a function that returns a portion of the transposed signal to the input, as there is a latency digital (very small but gives a slight impression of reverb when I plug in my guitar for example), a fraction of the signal transposed and implemented is again retransposed quickly, it makes a kind of vague / drag, if you listened to the demo of the reverb Verbzilla of line six, there is a preset that sonn just like that, this is rather artificial but this can be used to make sounds too shady
3) the foot is that in addition there is a rack behind the insert to plug a delay in series with the regen, like that implemented the note back to the entrance with a delay and then she climbs a staircase in your a tone one tone etc.. It's not very musical because a third of a third rise again etc., ca glue not necessarily with the arrangement of a song, but you can still use it!

Mine is 120 volts with a transformer external ca breath when not even bad, the converters are not tip top but even when it does.
I use it live, and breath bothers me when even a little, maybe a history of mass ...
Overall, this thing is unique, I do not use it to make the whammy harmonies that will probably work better for a guitarist who wants to do a solo doubled to straight or have a Octaver. With a blast distortion becomes intolerable and transposition does not sound really very good for anyway.
What makes this thing very well against it out by sounds really twisted, you get interesting ambiences and ground with just a guitar and a delay in the loop of Regen and that's why he serves me, I do not know what else I could use to make these sounds there and when he let me go I will be very bored!

I put 5 for breath and the fact that you can not really use it for what it is supposed to do, a whammy is more expensive but better

I love this stuff despite its flaws.
It's not ideal to own stuff and if you propose a more than 100 euros is a scam (this opinion is my business)
I've had mine for 60 euros and it is reasonable to say that there is more support and it is almost impossible to obtain information on this stuff, so if it breaks blocked roads is bad!

If you want a whammy equivalent of go your way, if you want to engulf sounds bizarre, it's an interesting option! In addition to almost no one has this thing, it has the right to tell it a little ...
See the source
Did you find this review helpful?yesno
Cookies help us improve performance, enhance user experience and deliver our services. By using our services, you agree to our use of cookies. Find out more.