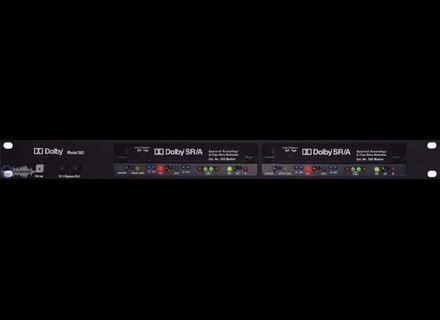 Model 363, Other Studio Effect from Dolby.

This device is a system that rduction of breath (and any other noise indsirable) 2 channels Fully rack that uses clbres prstigieuses standards and Dolby A and Dolby SR. It is therefore intended to tape recorders, professional recording studio or broadcast (Studer and Otari widely board. It can use three pairs of cards rduction of breath (the electronic cards are removable from the front without having to disassemble the unit ^_______^):

Cat. Module No. 300 (A and Dolby SR - choice of one or the other by the device slecteur mre)

</ul>
For audio cassettes, it is to use standards Recommendable Dolby B, Dolby C or Dolby S, all three supported by his counterpart Dolby Model 422 (which is the only Dolby MODEL of my knowledge not use of removable modules: the encoding and circuits are in the unit dcodages same). This latest can be also used recording on tape in order to mre prparer a band that will duplicate the commercial music cassettes prenregistres because the band must be mre prencod e forward with Dolby chosen for the final audio cassette duplication.

The 363 is a device Fully analog with a set of 8 XLR symtriques, and this in height making only 1 U ^_________________^ And just because this is a rvolution usual, the other MODELS stro are at least 2 U. And besides, it is the first and only brand that is able to support two standards rduction blast on a single pair of removable cards. Indeed, on the other models (apart for the Model 422), he had wanted to swap the modules when changing standard rduction of breath. These two CHARACTERISTICS caused a sensation in the middle of the professionals at the output of this model. In addition, unlike other models the most part of Dolby, it has a design that inspires professionalism.

It is advisable to take the time to STUDY the user manual (in English) before putting into service because it is a device that requests be calibrated with tape recorder with which he will be coupled prior to use. The device possde why an internal oscillator SPECIFICATIONS for Dolby A noise and gnrateur SPECIFICATIONS for Dolby SR that can do some of these rglages. However, an external oscillator is required, unless the tape recorder is not quip, but it is also possible the gnrer frquences given by the said external oscillator with the computer, with a Software edition of sound waves (like Adobe Audition, for example).

Then, once the cblages ffectus and calibration, usage is simple: just put a first slecteur on Every one of the two channels, when in PLAY mode to play a tape or REC mode when recording a band and wish to select the Dolby (A, SR or OFF) with a second and you&#39;re slecteur jou ^___________^ However, having to choose between the PLAY or REC mode prevents the cost in Stereo and dCode the sound from the read head of the recorder, the one that reads IMMEDIATE what has just been DPOS on the tape (in the case of a 3 heads), when the 363 is in the REC mode and it is a shame. In this mode, it reproduces the sound of dCode output destined for the table or mix the mixer but I do not feel that this signal comes directly from the tape recorder . Well, the device possde troixime slecteur a channel that allows just listen to the sound from the machine but it is a mono sound and encod. Too bad ...

Attention: during transport, it is recommended to tape the front of the camera to retain two removable modules that can fall because they do that by pinching the connectors inside the unit and they move lgrement vertically, there is no hook or anything else that keeps them so be careful.

It is also important to note that the Dolby standards are not compatible with each other (and from other standards such as dbx). If you try, for example, a band dCode Dolby A or dbx with a Dolby SR sound reproduction is poor: much better then choose the type of Dolby use before buying such a device and what choice must be made according to what you have registered as bands for your records and the type most commonly used Dolby studios with whom you work or with whom you outsource part of your job, but with the Model 363 equipped Module Cat. No. 300, you will not risk this last point because the Dolby A is used in recording studios since 1965 ^_____________^

The unit is a precision formidable (I tried it on a DAT recorder, once just to see) any lack of precision is inevitably the band but not the Model 363.

A band, especially when it does record in 38 cm / s, produces almost no audible breath but can produce other sounds indsirables: parasites, drops outs, etc ... In fact, the Dolby A or SR (as it does not dpend device but standards Dolby A and SR) is not only the breath but rduire Reduces gallant Whereas these other impurts sound. It does not delete them but compltement Reduces the point where the tape recorder with which it is coupled with Dolby rivals Systmes numriques current, especially when that is the Dolby SR is used ^______________^

I use it with my tape recorder Otari MX5050BQII especially in order to be compatible with the standards of breath rduction the most popular band and I must say that I am satisfied with TRS. Yes, it is a device that is expensive (even used!) But it almost mandatory in case of a possder ensure compatibility when to exchange of tapes between audio professionals.

Most of this model:
<ul>

Do not allow the cost of the signal and stro dCode coming directly from the recorder when recording but it does not matter: we do confience Mr. Ray Dolby (inventor PROCD of Dolby) ^ ^

It is now clear that the numrique - especially with the 24-bit 96 KHz - this technology is Exceeds. The signal to noise ratio have become so levs that rducteurs of breath no longer necessary, except when necessary numriser strips encoded with the ProCD eras.
See the source
Did you find this review helpful?yesno