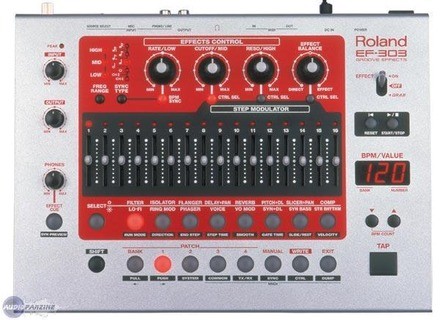 EF-303, Other Studio Effect from Roland.

View other reviews for this product:
See below for the list of effects. Personally, I use it mainly as a syncable resonant filter but also as a MIDI step sequencer (it even sends notes...).
No PC editing, it's not rack-mountable, very digital, jack in for a mic, RCA for line or phono (it has a built-in RIAA preamp). RCA output. Midi In and Out.

Everything is relatively simple and can be easily edited. The manual is clear and you might need to read it thoroughly to learn how to get the best out of the unit!

Effects are digital and a bit dated, so they can seem a bit cheap. But the fact that the effect can be synced to the MIDI tempo makes this machine really useful.
In the worst case, you can avoid the internal effects and control the effects of an external expander via MIDI. The possibilities are huge.
The analog-like step-sequencer made me buy two (one for the note, one for the filter).

I got one as soon as it came out, but sold it because I didn't know much about MIDI. It was only later that I realized the possibilities the unit offered and bought two of them. There's no other unit on the market that can do so much for so little money.
Excellent value for money secondhand, but take your time to actually understand it.
Did you find this review helpful?yesno
Cookies help us improve performance, enhance user experience and deliver our services. By using our services, you agree to our use of cookies. Find out more.