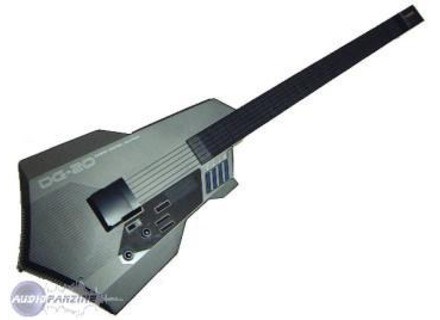 DG-20, Other Synthesizer from Casio.

View other reviews for this product:
This is probably one of the most ridiculous instruments I've ever encountered in my relatively short lifetime. It's a digital MIDI guitar, made in the 80s (of course). It's basically a guitar synthesizer, and while it has real strings and plays like a normal guitar, all it really does is send data to the MIDI converter that you happen to be using. While it has a few (bad) sounds of its own that I would never use as a substitute, its tonal palette is as limited as your MIDI setup, regardless of what you are using.
This would theoretically be really cool if you use MIDI a lot, and want to get a different feel to a keyboard. However, it doesn't really react all that differently from a keyboard, as there is no way to do vibrato or pitch bends with it. At this point, it makes me wonder why a guitar would be necessary at all, as without the actual guitar tone, or the ability to use vibrato, a guitar is borderline useless. I imagine it could free you up from using a keyboard as it would encourage different chord shapes, or perhaps different kinds of rhythms, but considering that a guitar is limited in the ability of rhythms anyway, this is kind of a bad trade-off.
While a real guitar is easier to get rhythms out of than a keyboard (unless you are a great keys player, in which case it's much harder), this instrument is severely limited. If you are using MIDI data that can be manipulated and controlled after the fact anyway, I'd be surprised that anyone would prefer to use this. In fact, I found a clip of some comedians using it just because it was absurd and ridiculous. I would only use t in live situations if I was going for comedy.
In short, this was a disappointment. I guess I've been going about using MIDI the wrong way, as it's really a keyboard player's game.
Did you find this review helpful?yesno