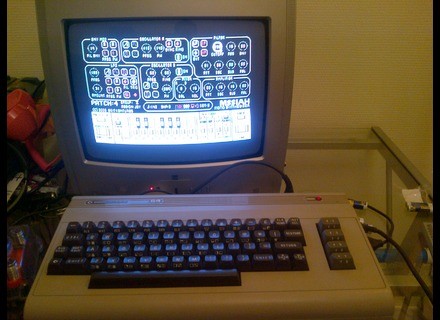 Mssiah is an app developed by '8bit Ventures' in 2008, which followed the Prophet 64. project involves using the amazing capabilities of the famous SID chip of the Commodore 64.

It is physically present in the form of a cartridge to be inserted at the back of the C64, on which there is a providential MIDI input (but not output). Providential, as we have read in the forums before 2008, right here in particular, that such a possibility was utopian!

Mssiah loads when you turn on the computer, and offers several options: a MIDI sequencer, a monophonic synth, a drum machine, a kind of TB303 and a sample player. All the details and images here:

So beware! working on a machine designed in the early 1980 ... Use this app implies accepting the constraints (such as the absence of a mouse, making use of a joystick essential). But the C64 is a mythical machine, and no aficionado of computer music, even if less than twenty years, can not resist his irresistible appeal. Just its color, which ranges from coffee-cream and soft-poo, still draws me tears of emotion.

The SID is known primarily two versions: 6581 or 8580 are notable differences, particularly at the filter more effective in the 8580 release.

With MIDI input can be controlled via MSSIAH keyboard, DAW ... accessed without regard to parameters via the control changes. I'm a little pub: I created on MaxForLive two free small utility modules dedicated to law and BassLine Drummer here:

Something a bit boring: when MSSIAH is MIDI sync, the screen turns black. This is necessary according to the designers of the software, to avoid interference of the video on the sound, it seems.

Handling MSSIAH is not easy, but if you have a C64, is that we are ready to get their hands dirty!
All modules are subject to a manual in pdf and English very well designed and comprehensive.

In sound, it is obviously in pure electro. Do not expect miracles, but we find the inimitable 80's lo-fi (but not only).

The monophonic synth is largely a joke and the BassLine module.
Drummer module, that is something else. Clearly lo-fi, it looks like a TR909 spent in a bit-crusher set to jackhammer. That's interesting.

I loved the sample player. It feels to work on a Fairlight is Back to the Future! The procedure to load samples (6 kHz format !!) has not been tested by me (it will not be long), but the app offers a library of percussive sounds (like TR, Linn, ...) with which we create a set, like any current sampler. The sounds are interesting, it is clearly in a vintage and lo-fi approach.

I'm MSSIAH from just one month; I gradually discovered the qualities, but I'm blown away with the quality of programmers at 8bit Ventures, they offer a kind of Holy Grail that still seemed impossible just 10 years ago.
See the source
Did you find this review helpful?yesno
Cookies help us improve performance, enhance user experience and deliver our services. By using our services, you agree to our use of cookies. Find out more.