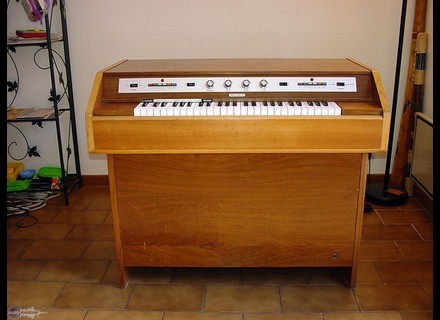 300, Other Synthesizer from Mellotron.

The Mellotron is a pretty unique instrument, at least for its time. This instrument is a keyboard based instrument, it predates the modern synthesizer. The interesting thing about this instrument is that instead of the keys moving hammers that strike strings, the keys trigger tape players. Each key is assigned to a different length of tape, which is then played until it runs out (usually about 8 seconds). There are different kinds of tape samples (woodwinds, strings, voices) depending on the instrument. They can be customized to play different sorts of tape loops, as well. This is pretty old, and predates the PC, so no computer or MIDI controls. It's a polyphonic keyboard with limited range.

This thing works well...when it works. These instruments are notorious for breaking. Having multiple tape loops inside the machine can be tricky. The initial setup is almost a disaster waiting to happen. Any user manual would have to be a sublimely complex piece of work. Simply put, this is a nightmare to get working when it breaks.

The interesting thing about this instrument is how "unreal" it sounds. None of the samples that are played by the keyboard come out sounding quite like the the instrument they are supposed to emulate. However, the sounds produced by this machine are pretty interesting in their own right. They are all over David Bowie's "Space Oddity", the Moody Blues' album "Days of Future Passed", and countless progressive rock records by Yes, Genesis, King Crimson and others. It's simply a one of a kind instrument. They tend to give music a creepy, otherworldly vibe. Half the reason I like it so much is because of the tape; I think analog tape colors instruments in a really interesting way. It is this effect that makes it sound so peculiar. It is rather limited compared to later synths and other related instruments, but it's rarely, if ever, duplicated well.

Hands down, the biggest problem with this thing is its maintenance, not to mention how expensive it would have to be nowadays. For the price, this thing is pretty outrageous. However, it's one of the coolest instruments in the world, and owning one would give you incredible bragging rights amongst musicians. If you are too poor or busy to buy one, and need the sounds, look into a good synthesizer that can emulate it well (sorry, haven't found one yet). Otherwise, get this and fall in love.
Did you find this review helpful?yesno
Cookies help us improve performance, enhance user experience and deliver our services. By using our services, you agree to our use of cookies. Find out more.