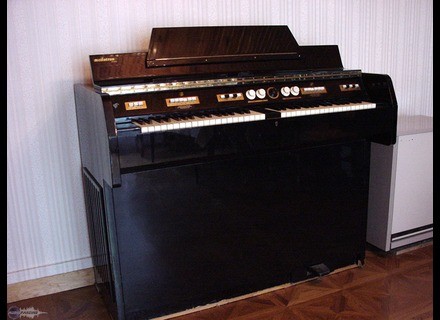 Mark II, Other Synthesizer from Mellotron.

The Mellotron Mark II is an analog synthesizer that is one of the first of its kind. It works like this: when you hit a key, it triggers off a sample in the form of a real analog tape. It has a number of different types of sounds, including samples of strings and flute. The Mellotron was a huge step in technology and has become revered because of it. It is a fully polyphonic keyboard and has a built in speaker.

The configuration of the Mellotron Mark II is pretty easy to follow, and all of the knobs and buttons are laid out smartly. It is easy to choose between the different sounds, and each sound can manipulated further, depending on how you set these parameters. I don't have a manual for the Mellotron Mark II, but is pretty easy to use and you shouldn't really need it if you don't have one. Since these are hard to find and are pretty old, a manual will be pretty hard to come by anyway.

The sound quality of the Mellotron Mark II is unique, even though it emulates real instruments, like strings, flute, and brass. What you get is somewhere in the middle of a sample and the real thing, combining for a unique sounds that are identifiable with the Mellotron. This was used mostly in the 1960's by rock bands, but has maintained a place in music and is still used today. Overall, an awesome sounding instrument that is unique to itself.

I've only been using the Mellotron Mark II for about two years, but I have really become obsessed with it and use it whenever I get the chance. I use mostly the string sounds, but all of the sounds are great. This was used all over famous recordings by the Beatles, Led Zeppelin, and the Zombies, which is a big reason that I have come to love the sound of this so much. The Mellotron Mark II is pretty rare these days, and if you can find one, they are pretty expensive. This is why I would recommend finding a professional studio when you want to use the Mellotron Mark II. There are also some pretty good plug-ins that emulate these tones, but theres nothing like the real thing. Overall, the Mellotron Mark II is a classic instrument that all music lovers should experience in one way or another.
Did you find this review helpful?yesno
Cookies help us improve performance, enhance user experience and deliver our services. By using our services, you agree to our use of cookies. Find out more.